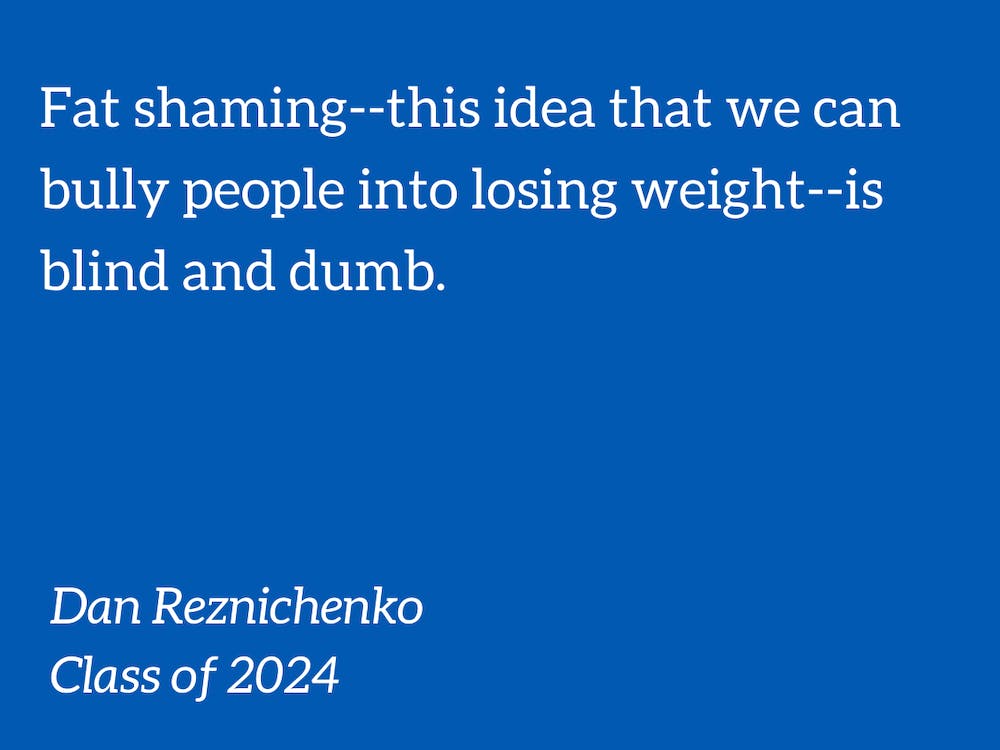 Why body positive? – The Chronicle

Like many people, I struggled with my body image. And like many people, those worries were unfounded. At my “worst,” I was just a little chubby. Nevertheless, I have long considered myself to be overweight. Why? People called me fat and, quite frankly, it distorted my perception of myself. This idea of ​​’fat’ has become an obsession for me. For a long time, I refused to be photographed. The thought of people sharing them and making fun of my body terrified me. I avoided looking at myself in the mirror and changed my posture to try to hide my insecurities. At the same time, in the midst of this deep and permanent shame, I did nothing to help myself. I didn’t exercise and I didn’t change my diet because mentally I was defeated. I viewed my body as a point of shame, rather than a part of me; I was fat because I was weak, and I was weak because I was fat. I didn’t have the will to exercise – I didn’t think I could – and I didn’t see the point in eating better.

At puberty, this extra weight began to disappear. These subtle changes in my physique made me wonder, over time, if “maybe I’m not fat, actually.” Soon after, I started taking my health seriously. I would be determined about what I ate and pay attention to how my body felt. As I became less alienated from my own body, I realized the value of improving my well-being. This attitude appeared over the months and years, and so I gradually learned to take care of my diet.

Later, I started to take an interest in sports. Initially, my motivations were purely aesthetic. I wanted to be bitten, and although I started to like exercise, I found it hard to stick to a routine. Without quick and obvious results, there was little to keep me in the gym. Aesthetics, at the end of the day, is not a sonic motivation, not for me, at least. Then, when I stopped worrying about my appearance and weight, and came to see exercise as a form of stress relief, I worked a lot harder. These days, as someone completely comfortable with their body, I can say that I have never been more dedicated to exercise or proper diet than I am right now. My mind is only focused on feeling healthy and achieving my goals. If someone were to tell me that I should look a certain way, or that I should eat somehow, I doubt it would do me any good. In fact, I’m sure it would bother me.

This is where I come into the “body positivity debate”. Every once in a while I’ll see an article on Yik Yak, or Duke Confessions, that basically asks us “why shouldn’t we be shaming people?” Their argument, as I understand it, is that body positivity condones unhealthy lifestyles and complacency, while fat-shaming will make them work harder. In a very simple way, their argument makes sense: we shouldn’t encourage people to be unhealthy, and people should be encouraged to take care of their bodies. However, body positivity does not mean treating all lifestyles as equally healthy. For me, at least, it’s about telling people that regardless of their body shape, they’re worthy human beings. It’s about disentangling his appearance from his value as a person and, in doing so, helping him have a healthy relationship with his own body. Fat-shaming is the opposite, and it’s not an incentive to take care of yourself.

I mean, it’s literally in the name: fat-shaming is designed to turn your body into a point of shame. Its victims are made to feel inadequate, and this is meant to somehow compel them to act. I’ve already described an obvious problem with this: if you’re told your body is a sign of moral failure, it’s hard to believe you can change it. It creates a sense of helplessness and allows you to sink deeper into the unhealthy habits you already have. Plus, it leads to a situation where unless you live up to what you consider an “ideal body,” you feel like you’re failing. Imagine the angst that must come with losing 20 or 30 pounds and still being told that you’re weak, that you’re not trying hard enough, because you have 60 left. Imagine going to the gym for a month, that you can finally run a mile and still be called lazy.

In this way, fat shaming – this idea that we can bully people into losing weight – is indiscriminate and stupid. It treats anyone who isn’t already “perfect” as if they were flawed, and it doesn’t help anyone. Sure, you hear stories of people being ashamed of losing weight, but I wonder if that’s really what happened. Many gym rats who were once overweight, many of whom have had experiences with weight-based bullying, seem to really enjoy the process of working out. Looking at what they say, I get the impression that they exercise to feel more empowered – to beat personal bests and achieve goals – rather than to pursue the perfect body. Obviously, the body is nice too; I know I like to think I’m building muscle mass. However, something tells me that, for many of them, this is not the reason they are pushing for one more rep. More power for them, I think they are doing well.

On the other hand, there are people who experience this shame, achieve a body that almost everyone would call “ideal” and continue to struggle with their image. Even “ideal” people may have eating disorders, abuse steroids, or simply continue to be dissatisfied with themselves despite their accomplishments. For me, this is not a good result for fat-shaming. As someone who has dealt with these feelings of doubt, this is not something I would wish on anyone. They harm your quality of life and, taken to extremes, can make you unhealthy in the opposite direction.

Therefore, I will always be categorically in favor of body positivity. From what I’ve been through, from what I’ve seen, respecting people and their bodies will inspire them to take care of themselves. On a personal level, it is the foundation of a healthy relationship with health. And while it may take years for it to manifest, it beats the alternative. So if we as a society really want to help people lose weight, we need to treat people with respect and empathy; flies, honey, vinegar, etc.

Dan Reznichenko is a sophomore at Trinity. His column usually runs every other Wednesday.

Get The Chronicle straight to your inbox

Sign up for our weekly editorially curated newsletter. Cancel anytime.