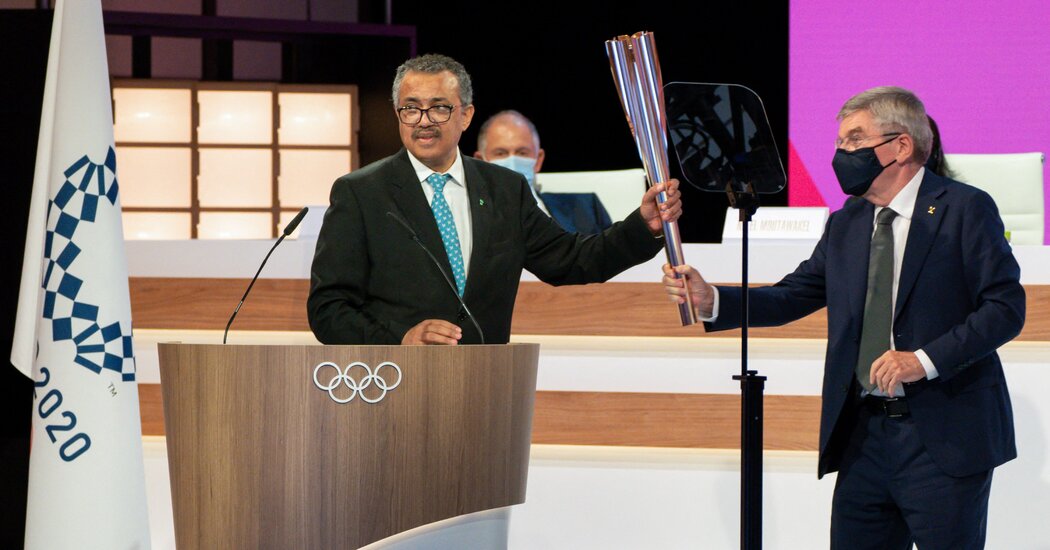 WHO leader endorses Olympics as ‘celebration of hope’

In a world divided by access to vaccines, social restrictions aimed at limiting human contact and an ever-changing maze of border closures that continue to separate people, the head of the World Health Organization said that ‘he hoped the Tokyo Olympics could represent a moment of global solidarity.

“The Olympics have the power to bring the world together, to inspire, to show what is possible,” agency director general Tedros Adhanom Ghebreyesus told the International Olympic Committee on Wednesday.

Holding an Olympic torch in the air, he sought to give a note of optimism even as the world faces even more waves of infection and uncertainty.

“May the rays of hope of this earth light up a new dawn for a healthy, safer and more just world,” he said.

But even as he spoke, the virus continued to stalk athletic competition.

Chilean taekwondo athlete Fernanda Aguirre has been kicked out of action after testing positive for the virus, according to a statement from Chile’s National Olympic Committee. Dutch skater Candy Jacobs also announced on Wednesday that she tested positive and did not participate in the Games.

Two days before the opening ceremony, thousands of athletes, coaches, referees and other officials have flocked to Japan in recent days. More than 70 people affiliated with the Games have tested positive, according to the organizers, including five in the Olympic Village.

With less than a quarter of the Japanese public fully vaccinated, there is intense opposition to the Games in a country fears they could turn into a big-ticket event.

Mr Tedros said it was always highly unlikely that there would be no infection at the Olympics, only that the spread of the virus could be mitigated.

Success did not require “zero cases,” he said. “The hallmark of success is ensuring that all cases are identified, isolated, located and treated as quickly as possible, and that transmission is interrupted. It is the mark of success for each country.

Even though he warned the world was “now in the early stages of yet another wave of infections and deaths,” Mr Tedros said stopping the epidemic’s worst devastation would require greater political unity that governments have so far failed to bring together. He called the world’s failure to distribute vaccines more equitably “with moral outrage” and “epidemiologically and economically self-destructing”.

But the gathering of athletes in Japan, he said, could perhaps provide inspiration for a divided planet.

“It is my sincere hope that the Tokyo Games are successful,” he said.

How to predict the impact of inflation on installment loans