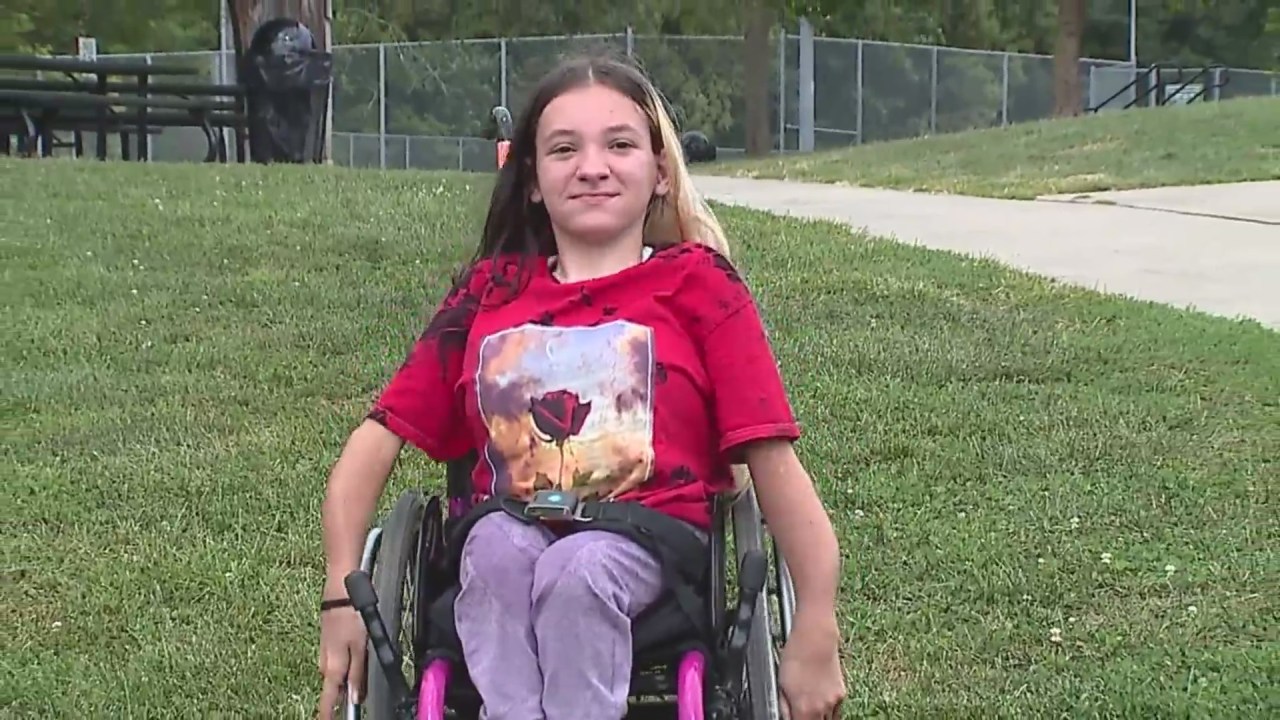 INDEPENDENCE, Missouri – A cheerleader at Truman High School in Independence said the sports department was restricting her participation because of her wheelchair.

Her family said they couldn’t join the cheerleaders in the field, fearing her chair could damage the grass.

At the Santa Fe Park Picnic Lodge on Monday, blades of grass and tufts of clover bounced off the wheels controlled by 18-year-old Lacy Kiper, entering his second year on the Patriot cheering team. .

“It’s definitely very difficult to find a place to feel involved because, for the most part, I’ve never been more than the only wheelchair user in my school,” Kiper said.

Kiper was born with type 5 osteogenesis imperfecta, so her bones break very easily.

“I had broken those two arms and the bone was not placed well, so when the new bone started to grow here it just fused them together where they were positioned,” she said, indicating curvatures in his forearms.

Her father, Charles Kiper, until two years ago, she was very protected.

“And she said, ‘I want to cheerlead.’ I told the school that I would put her on the mat if they wanted to. I will be there for every game if they wish. I will be sure that she has someone to help her in any way whether it was to be part of this team. And they turned me down pretty much everything, “said Charles Kiper.

This is the trend that the Kipers say has intensified this school year. Lacy said she was largely ignored or felt like a distraction. And recently the field has served as reasoning, she said, to separate her.

“They didn’t want my wheels, I guess, to be too heavy and damage the grass a bit for me to get stuck in them,” said Lacy Kiper.

“But even for the basketball court, they said no. And I was like, ‘This is a floor I go on all the time,’ ”she said.

“I provided them with three medical notes from her longtime orthopedic surgeon who has done all the surgeries and has known her since she was 2 months old. And they always tell me no, ”said Charles Kiper.

It left this Independence family frustrated.

“It irritates me mostly because I don’t even get the ‘Hey, do you think you could? Or the “Hey, this happens in advance – not everyone knows that yet, but we want to know what you think of how you might participate,” said Lacy Kiper.

“Because I would like my ideas to be involved in it as well,” she said.

The Independence School District told FOX4 it was ready to talk about the matter, but Lacy’s dad would need to sign privacy waivers first. So far, Lacy’s father has refused to do so. He tells FOX4 that he’s worried about giving up too many rights for his daughter.

In a statement to FOX4 after the initial story aired, Independence School District Superintendent Dr. Dale Herl said: “There is absolutely no truth to the statement that the district would not allow Lacy’s wheelchair to be on the ground.”

FOX4 Newsletters: Get updates delivered to your inbox

Here is the full statement from the Independence School District on the situation:

“A local newspaper recently ran an op-ed with significant inaccuracies.”

“The district cannot substantially respond to such inaccuracies without the consent to release the parent’s student records. In this case, the parent chose not to sign the HIPAA and FERPA authorizations to allow the District to respond.

“Without these communiques, the District is limited in what it can discuss. While the Independence School District cannot respond in a substantial way to the editorial, the district would like to reiterate that it takes the safety of everyone involved in our activities seriously and remains committed to ensuring that our programs and activities are inclusive, safe and welcoming for all. students. “