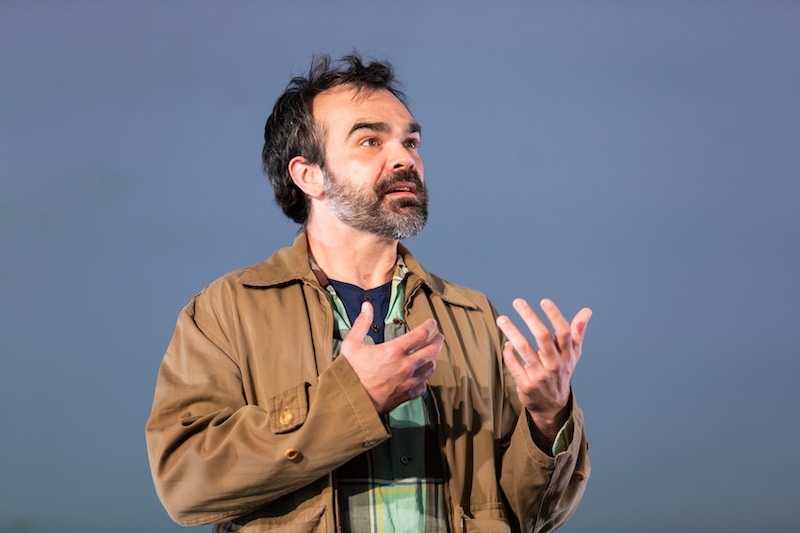 THEATER REVIEW: “Title and Deed” is pure and true theater

James Barry stars as Man in “Title and Deed” by Chester @ Hancock. Photo: Elizabeth Solaka Courtesy of the Chester Theater

The production of the Chester Theater Company “Title and deed” staged in a pitch-side tent at Hancock Shaker Village, is a drama masterclass for Will Eno, acting for James Barry and directing for Kiera Naughton. Eno’s unique character, Man, enters, appearing almost as homeless (which he is), carrying a dented duffel bag, having cleared entry into an unknown country. Business or pleasure? “Neither one,” he said.

If that sounds like the 70-minute play takes place in no man’s land, with a nod to Harold Pinter, you’re close, but Eno puts Man squarely on Becket’s grounds. And, if irony abounds in the world inhabited by Man and precisely shaped by director Naughton on stage, look no further than the title. Does “Title” refer to an act as in a document (or just a name)? Does “act” refer to a legal title (or to a meaningful act)? They can be synonymous or have nothing to do with each other, which hints at all the inherent and filled contradictions of the hypnotic and fascinating monologue of Man.

The man tries to dialogue with the audience, but quickly concludes. “Sorry, but I don’t feel much joy here with all of you. Her elliptical speech, which adopts lyrical symmetry in Barry’s stellar performance, is peppered with quirky and often bizarre anecdotes from everyday life, but is weighted by the personal stories of father, mother, girlfriend Laura, a another called Lisa. Yet Man returns to words again and again. He can’t find meaning in life, can he find meaning in words? “Words take their toll,” he observes.

Barry is perfectly portrayed as Man. (Disclosure: I’ve led Barry in a read before.) His wide-open boyish face (under the beard for this role) suggests vulnerability, but also keen intelligence. Barry’s Man isn’t just world-weary, he’s a traveling intellectual, maybe somewhere on the spectrum. Barry imbues the role with a hidden, creeping tension, which finds its pathetic expression with one of the two personal items he carries in his duffel bag. Barry’s is one of the best solo performances I’ve seen in decades of theater.

Naughton’s staging is so good it’s invisible, as evidenced by Barry’s impeccable naturalistic performance. The almost bare set is a framed door and what appear to be dislocated doors or wall panels scattered to the side, suggesting portals to… Where? Nowhere?

The sound design takes into account parasitic natural noises: cows mow in the field adjacent to the tent, distant motorcycles roll on the road. Is it really raining on the tent roof? It didn’t matter. Barry’s mastery of Eno’s material and Naughton’s sensitivity to it is so precise; I was in the world in the head of Man.

Man’s lonely journey is endless, his search for meaning elusive. Observe man in the most conclusive way possible: “All of us coming out of the ocean, breathing and breathing and breathing and then falling dead to earth, to a land we mistakenly like to think of as our own. Thank goodness I guess we made up words to blow and blow, to give shape to the whole. “And the Man moves on.