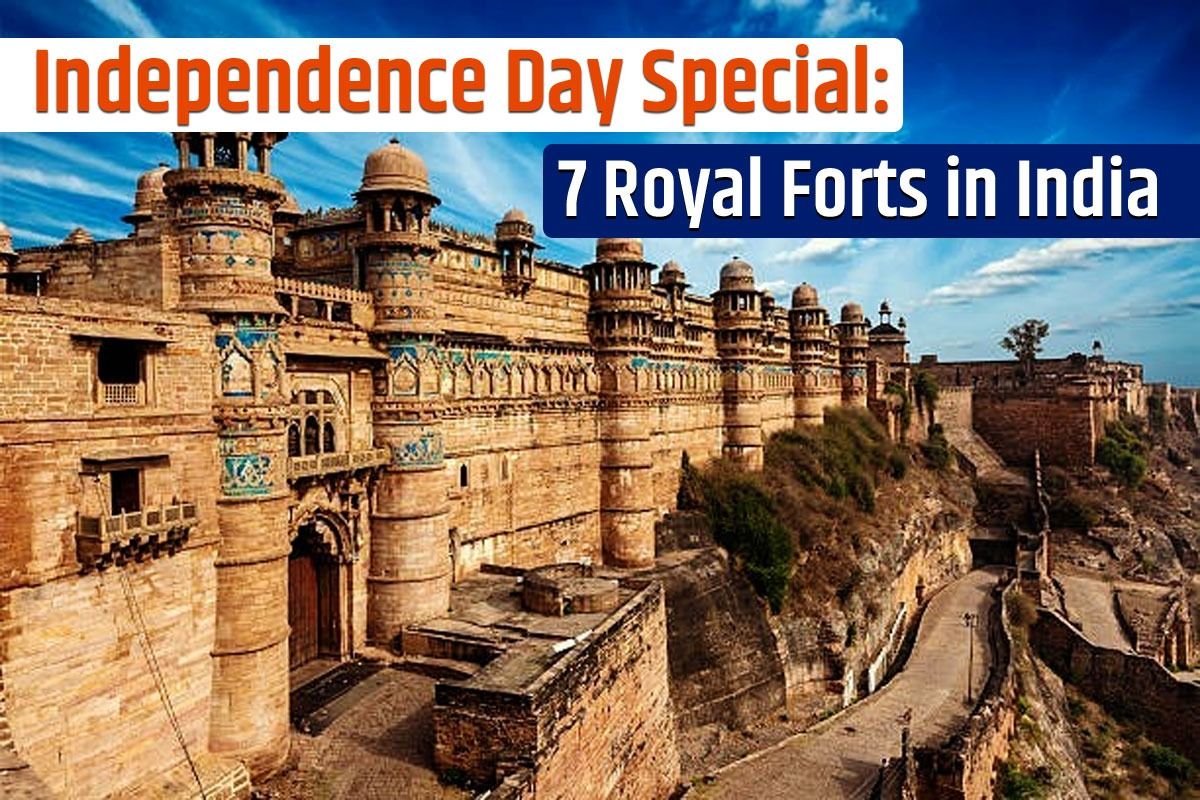 Take a Virtual Tour of These 7 Royal Forts in India

Independence Day Special: India’s struggle for independence may have ended the reign of kings and queens in India, but these still standing monuments tell us about the rich history of this country. Quintessential in style and architecture, with tales of victory and defeat, with surrender from ruler to ruler, these forts ground India’s existence, whether geographically, culturally or across a common past, in the historical landscape. There’s no excuse to leave any of these places without a visit. Take a virtual tour of some of these awe-inspiring forts around the country.Read also – India @75: 6 facts to know about India’s freedom struggle

Here is the list of 7 royal forts in India:

The fort where India declared its independence.

The magnificent Red Fort which was the pride of the Mughals recorded the historic moment of India’s declaration of independence at the stroke of midnight on August 14, 1947. The fort was built in the 17th century by the mighty Mughal ruler – Shah Jahan. The thick walls of the Red Fort made of red sandstone protected the Mughal dynasty for nearly 200 years from their enemies. The fascinating fort houses a mosque called Moti Masjid, Diwan-i-Azam and many other structures within its walls. The fort is just opposite the cultural hub of Old Delhi, Chandni Chowk. Also Read – Independence Day 2022: 10 Crucial Facts About India’s National Anthem

The power of the Mughals, Agra Fort. Photo credit: Unsplash

If Taj is a symbol of love and beauty, this fort signifies power, might and contains the remains of a family that once stayed here. Agra being the seat of the Mughal Empire until 1638, this palace and fort was also the residence of the Mughals from 1573 when Akbar had it built in sandstone. The fort is entirely of sandstone except for two sections added later by Shah Jahan’s daughter which are of white marble. Agra Fort is an architectural masterpiece which is now one of the UNESCO world heritage sites and the second largest tourist attraction after the Taj mahal in Agra. Also Read – Mann Ki Baat: Prime Minister Modi tells people to use ‘Tiranga’ as their profile picture on social media between August 2-15

Located in Alwar, Rajasthan, the historic town of Neemrana is a must visit for the discerning traveler. About 120 km from Delhi and 150 km from Jaipur, Neemrana is part of the Golden Triangle circuit. The city transports the visitor to bygone times with its superb forts, temples, lakes and springs.
One of the city’s highlights is the Neemrana Fort Palace, a quintessential case of a fort-turned-hotel, where a stay of at least one night is highly recommended. An architectural marvel, it was built in 1864, during the reign of Prithvi Raj Chauhan.

One of the largest forts in Rajasthan, Mehrangarh Fort was the seat of the Rathore rulers of the House of Marwar. Situated at a height of 400 feet above the city of Jodhpur, the fort is named after the Sun deity, from whom the Rathores claim descent. Although the Marwar royal family later moved to more opulent palaces, the fort continued to be a reflection of Rathore’s glory. The fort is a magnificent fusion of different styles and influences. Its imposing ramparts, 125 feet high, are made of solid stone and are in places six meters thick. The fort now houses a museum that enlightens visitors about the golden age of the Rathores. It features collections of palanquins, furniture, cannons, paintings and folk musical instruments. The Daulat Khana, a gallery of the museum houses one of the finest collections of Mughal miniature paintings.

The fascinating Gwalior Fort which houses some of the oldest secrets. Photo credit: Unsplash

Gwalior Fort was built in the 10th century, making it one of the oldest forts in India. It is located on a hill in Gwalior. According to legends, the inscriptions found inside the fort date back to the 6th century, leading to speculation that it existed before that. During the reign of the Mughal rulers in India, this fort was used as a prison and until the British rule, it was always occupied by some rulers.

Khoob ladi mardaani wo toh jhansi wali rani thi are the lines of Subhadra Kumari Chauhan’s poem, “Jhansi Ki Rani”. Standing almost as a symbol of the first fight for independence, this fort bears witness to the sacrifices made by Rani Lakshmi Bai. This fort is crowned on top of the Bangura hill and is built with a fusion of Bundela style and Maratha style of architecture. Its granite walls are about 20 feet thick.

Located in the capital Hyderabad, the fort was first built out of mud by the rulers of Kakatiya in the 13th century. However, he gained fame under the Qutub Shahi dynasty. The world famous Kohinoor diamond was found here. An added attraction here is the enchanting sound and light show in the evenings. One of the most interesting features of Golconda Fort is its acoustic system. The sounds of hands knocking at the front door can be heard clearly at ‘Bala Hissar’, the highest point, one kilometer away.

India’s vibrant history is proof of its diversity. Boundless skies merge with indomitable walls to send a message that the strength of this country lies in its diversity and rich history.