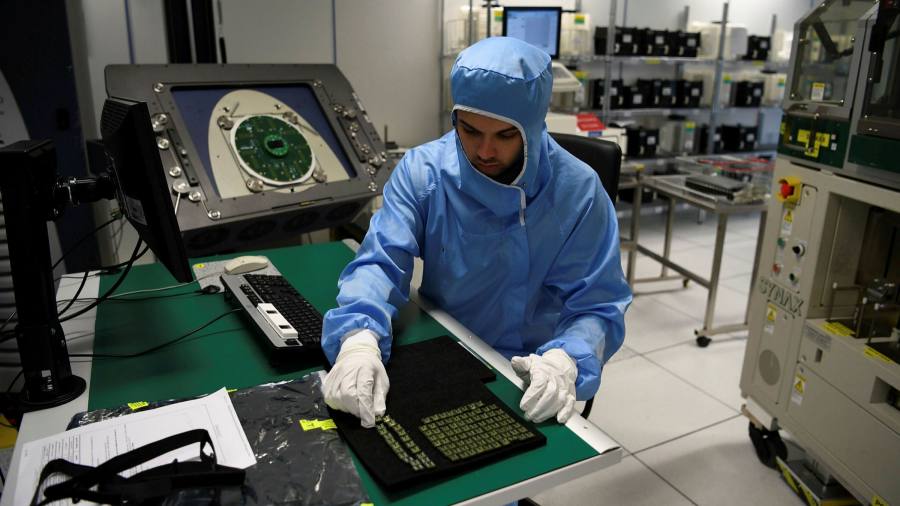 STMicroelectronics and GlobalFoundries are partnering to build a semiconductor fab in France, a multibillion-euro project that will receive significant government support as part of Europe’s efforts to bolster its independence in critical technologies .

The Élysée Palace said the joint investment by Swiss and American companies would amount to 5.7 billion euros, but declined to specify the amount of public money that would be allocated because details were still being finalized.

President Emmanuel Macron will visit the STMicroelectronics site on Tuesday where the plant will be built in southeastern France near Grenoble.

“This is the biggest industrial investment in recent decades outside the nuclear sector and a big step for our industrial sovereignty,” said French Finance Minister Bruno Le Maire.

The project is the second foundry to benefit from the EU’s Chips Act, a €43 billion plan to subsidize production in the bloc in a bid to secure supplies of the semiconductors that are boosting the global economy while trying to catch up in the cutting-edge smaller chips. which are made almost exclusively in Asia.

In March, Intel announced plans to build a €17 billion foundry in Magdeburg, Germany, along with other investments in Europe. The company is expected to secure billions in state and EU subsidies to produce the miniaturized chips that are typically used for high-performance computing devices, servers and smartphones.

The STMicroelectronics and GlobalFoundries plant will manufacture chips in various sizes down to 18 nanometers that are used in automobiles, factories and household appliances. These chips better match the needs of European industry, as few electronics or computer manufacturers are based in the region.

In a joint statement, the companies said they “will receive significant financial support from the French state for the new facility”, which aims to be at full capacity by 2026. Around 1,000 jobs will be created at the site from STMicro in Crolles, against 6,000 now, and manufacturing capacity will increase from 10,000 wafers per week to 22,000.

The announcement comes amid a global semiconductor supply crisis that has dragged on during the coronavirus pandemic, hampering manufacturing output at companies such as Infineon and STMicroelectronics that supply the European automotive industry and resulting in temporary plant closures at Stellantis and Renault, among others.

Industry executives have said bottlenecks will persist into 2023 and 2024 or longer, in part due to shortages of machinery needed to manufacture chips and the time it takes to build factories.

The crisis has prompted European leaders to seek to avoid being too dependent on chip production from Asia, such as industry leader Taiwan Semiconductor Manufacturing Co.

The Brussels-backed Chips Act is meant to be an important step in the EU’s broader “strategic autonomy” agenda, a drive to reduce the continent’s vulnerability to supply chain disruptions and geopolitical risks.

Asked about the impact of government support on the companies’ choice of where to build the plant, GlobalFoundries managing director Thomas Caufield said, “Without French participation, these investments would be very difficult.”

The United States is working on a similar program to invest up to $52 billion in chip manufacturing subsidies under its own chip law, but the law has not been funded by Congress.

Obedience and the Peace of God – Daily Leader