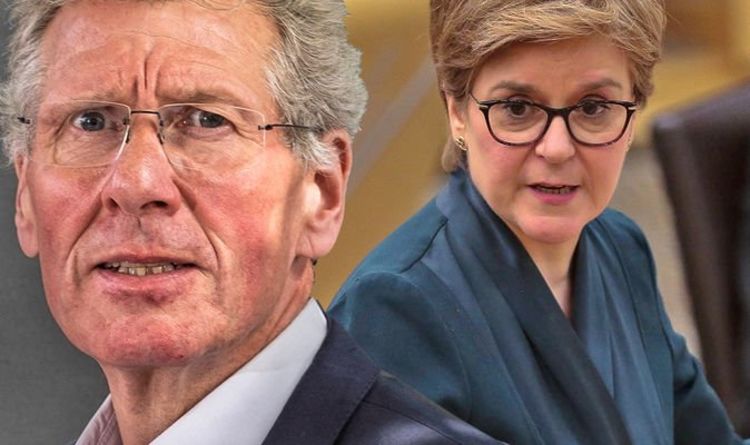 Former Scottish Justice Secretary Kenny MacAskill has said the Scottish Government is wasting too much time focusing on the “bad fights”, including Brexit and Boris Johnson’s premiership. A supporter of Scottish independence himself, he said the Nationalists’ time would be better spent persuading voters of his country’s advantages in “choosing its own destiny”.

Mr MacAskill wrote in the Scotsman that the SNP had become “distracted” from its stated aims.

One area where he thought this was most evident was Brexit.

Opposing Brexit, Mr MacAskill said Scotland – as part of the UK – had been “ripped out of the EU against its will”.

But the way to respond to this, he believed, was to advance the cause of Scottish independence.

Instead, the Alba party MP claimed that Ms Sturgeon and other senior SNP officials had spent their energies trying to keep England in the EU.

Mr MacAskill wrote: “They decided to try to save England from herself.

“Efforts have been to reverse Brexit in England, rather than mobilize Scotland to assert its democracy.

“Independence rallies north of the border were shunned, while events south of it with arch-unionists were overwhelmed.”

He added: “No matter where they were in 2014 or what they thought of Indy, putting their shoulder in the British wheel was everything.”

Trying to keep England in the EU rather than putting that energy into campaigning more for Scottish independence was not the only area where the SNP was chastised for acting in a ‘futile’ way. and “distracted”.

Mr MacAskill said that more recently Ms Sturgeon, along with Ian Blackford, leader of the SNP in the House of Commons, had wasted too much effort trying to remove Boris Johnson from the Prime Minister’s office.

Mr MacAskill had no pleasant words for the Tory leader, whom he called ‘a total charlatan and the worst prime minister since the turn of the 19th century’.

But he insisted that removing Mr Johnson from office was not a ‘major battle’ for the Scots.

He argued that instead the focus should have been on creating an independent Scottish state”.

Mr MacAskill was a prominent member of the SNP until he left to join Alex Salmond’s Alba party in March 2021.

The SNP, quoted by the BBC, said at the time it was “a bit of a relief”.

Ms Sturgeon is campaigning for a second referendum on Scottish independence, although this was ruled out by Mr Johnson in November.

The SNP has been approached for comments.