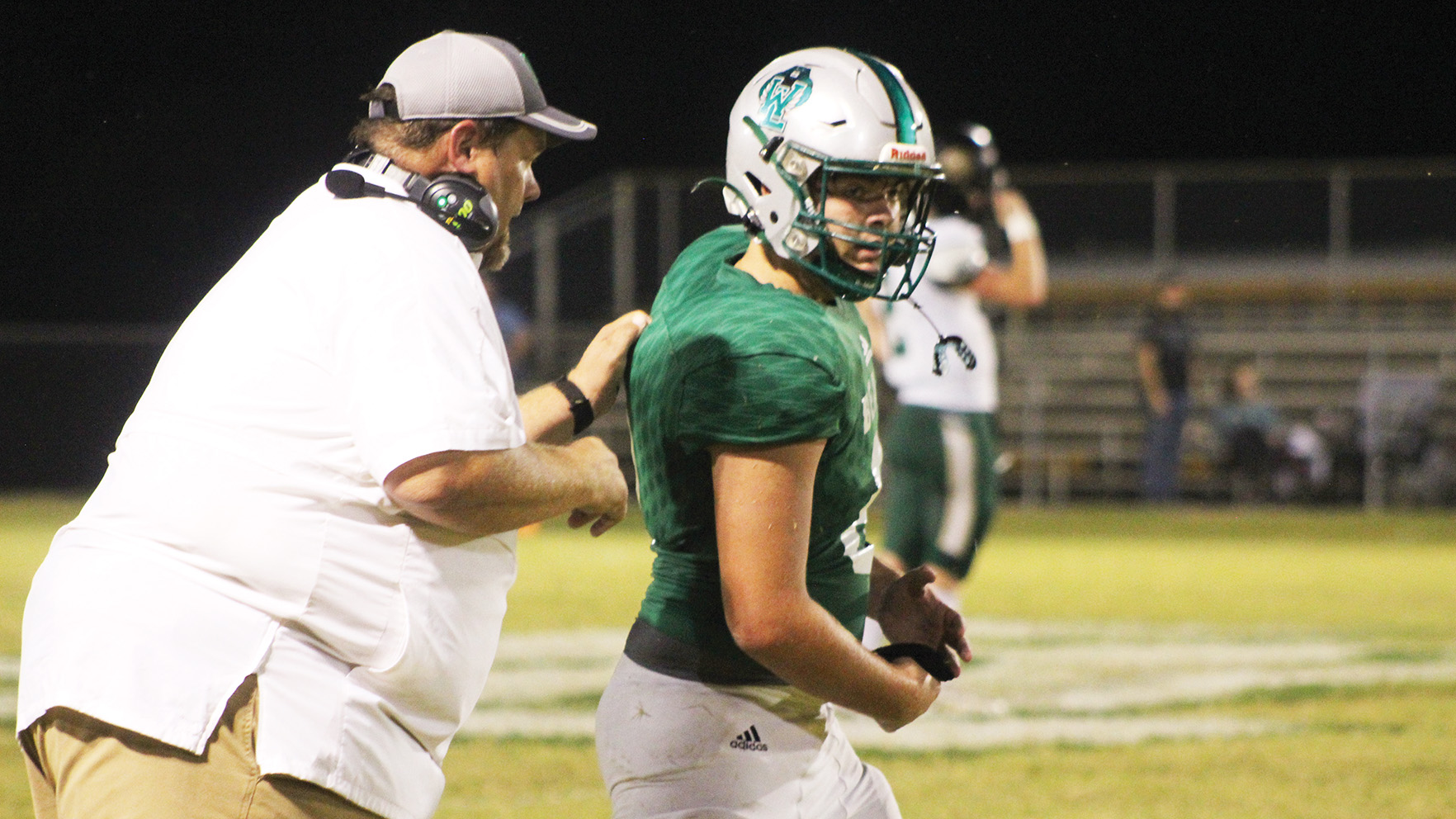 The McLaurin Tigers and West Lincoln Bears entered their matchup at Perry Miller Field on Friday night hungry for a win.

Each school had started the season with identical 0-3 records and the game appeared to be even from the start. Unfortunately for the green-and-white-clad faithful in the home stands, it was the visiting Rankin County Tigers who made the most plays on Friday in a 30-14 victory for McLaurin.

The win was the first of McLaurin rookie head coach Will Hedgepath’s career. The Tigers started the season with losses to Puckett (62-0), Loyd Star (61-0) and Richland (41-6).

It was West Lincoln (0-4) who gained momentum as the Bears took the lead in the first play of the second quarter. That’s when second-year running back Chance Stewart came in from 9 yards to give his team a 7-0 lead after a Josh Thornhill PAT kick.

It was a Thornhill punt that set the score.

The senior kicker/footballer had a punt inside McLaurin’s 10-yard line and it eventually led to McLaurin punting from his own end zone.

McLaurin’s kick went out of bounds on their own 22-yard line and put WL coach Brad Bland’s team in first place on the field.

The Tigers fought back on the next drive when senior offensive lineman/back Gage Brock rumbled from the 3-yard line. West Lincoln blocked the PAT kick and still led 7-6 with 8:34 left in the first half.

That first McLaurin drive was helped by a dubious 15-yard unsportsmanlike penalty that turned a very long 4th for the Tigers into a 4th and 2 which they then converted.

The penalty was called after McLaurin’s quarterback recovered his own fumble and the referee threw the flag when he said a West Lincoln player jumped on the QB after he was at earth. It wasn’t a play with any malevolence, but it hurt the Bears badly and breathed new life into McLaurin on a record that seemed dead.

The visitors then converted another 4th down play on their next drive, this on a 22-yard touchdown pass from Anderson Walker to Elijah Haynes who came on a 4th and 7 yards to go.

The conversion attempt was stopped and McLaurin led 12-7, where the score stood at halftime.

The third quarter started with another passing touchdown from McLaurin, then the Tigers clawed back a botched kickoff return for West Lincoln as things went from bad to worse for the Bears.

The Bears broke through for a second-half touchdown when quarterback Caden Seay hit rookie Layton Sullivan for a 5-yard touchdown pass with just over seven minutes left.

West Lincoln will be on the road next week in Pelahatchie to meet the East Rankin Academy Patriots.

A pair of field goals from Andrew Merrell completed the first half scoring for BC as Mize led 7-6 at halftime.

Mize then led 14-6, before the Bobcats came back for a third quarter touchdown and two-point conversion assist to tie the game at 14-14.

A rushing touchdown from Mize in the fourth quarter ended up being the difference in the Bulldogs’ victory.

Bogue Chitto and his coach Gareth Sartin will return to the friendly grounds of Troy Smith Field next week when they host Puckett Wolves (4-0).

The formula of a strong running game and strong defense again proved to be a winning combination on Friday for Loyd Star at North Forrest on Friday. Coach Brian Ford’s Hornets beat the NFHS 30-0 at Eatonville after leading 10-0 at halftime.

A field goal from Cooper Reid and a 7-yard touchdown from Bryce Ford were the only points for the Hornets in the first half.

Loyd Star opened the third quarter with an effective drive that was capped off by a Carter Holcomb quarterback that made it 16-0.

The LS offense got another big game from senior running back Julius Smith in the win as he scored twice in the second half to help the Hornets claim victory. The game was the third straight shutout for the Loyd Star defense.

It’s back on the road for Loyd Star next week as they travel to Jasper County to take on the Stringer Red Devils (1-3).

The visiting Amite School Center Rebels steadily pulled away in the second half on Friday to earn a 48-24 win over Enterprise at Harry Cole Field.

The reunion crowd at EAC were treated to a back and forth early in the game, with the score tied at 8-8 early in the first quarter.

It was the second straight victory for the ASC (3-2) after the Rebels beat Sacred Heart 14-0 last week. The Rebels beat Enterprise 36-14 last season at Liberty.

Enterprise (0-3) and coach Trey Woodard enter the 4-1A region next week with a trip to face Taylorsville High in Smith County.

A 2-yard rushing touchdown by Cotton Westbrook got Wesson on the board early and was followed by a scoring pass from Will Loy to O’Mari Johnson that put the Cobras in the lead 13-0 after the first quarter.

Johnson added a rushing touchdown in the second quarter and Loy joined Deshawn Smith on a 60-yard touchdown pass that put Wesson ahead 27-0 after Patrick Coleman’s PAT kick.

Loy capped the scoring in the third quarter for Wesson with touchdown throws to Justin Hailey and Johnson.

Next up for Wesson and his coach Jeremy Loy is a Friday home game against the Mize Bulldogs (3-1).

Coach Jesse Anderson and his Lawrence County Cougars (4-0) went undefeated Friday by beating the Taylorsville 1A Tartars (1-3) 47-25 at Monticello.

The Cougars scored first when quarterback Kannon Cato hit Anthony Owens for a first-quarter touchdown pass. Taylorsville fought back to tie the game at 7-7.

Reigning Daily Leader, Offensive Player of the Week, Ahmad Hardy fought back with a 65-yard touchdown run to put Lawrence County back in the lead.

LC led 14-13 after one quarter. A rushing touchdown from Cato gave the Cougars a 20-13 halftime lead.

After THS closed to 20-19, Lawrence County responded with another score from Hardy on the ground, then converted the 2-point try to make it 26-19.

Hardy then added another rushing touchdown in the third quarter as Lawrence County led 35-19 after three full quarters.

Cato and Markavion Owens scored from the ground in the final 12 minutes to help push the LC lead to its final score.

The Cougars wrap up out-of-region play next week with a trip to Walthall County to take on the Tylertown Chiefs (2-2).

The MAIS 5A Copiah Academy Colonels went 5-0 on the season Friday with a 48-6 victory over Brookhaven Academy in Gallman.

It was a similar scene to the CA 45-7 win at Brookhaven last season.

The rest of 4A Brookhaven Academy’s regular season schedule (3-2) will be favorable matchups with schools their size or smaller.

Next up for coach Anthony Hart’s BA team is a Friday home game against 4-4A district rival Columbia Academy (1-4).

The Colonels will travel to play Jackson Prep next week.

Brookhaven High at McComb’s game scheduled for Friday was canceled earlier in the day due to concerns over a threat to one of the schools in the Brookhaven School District.

The Panthers return to King Field this week when they open regional play by hosting the West Jones Mustangs.