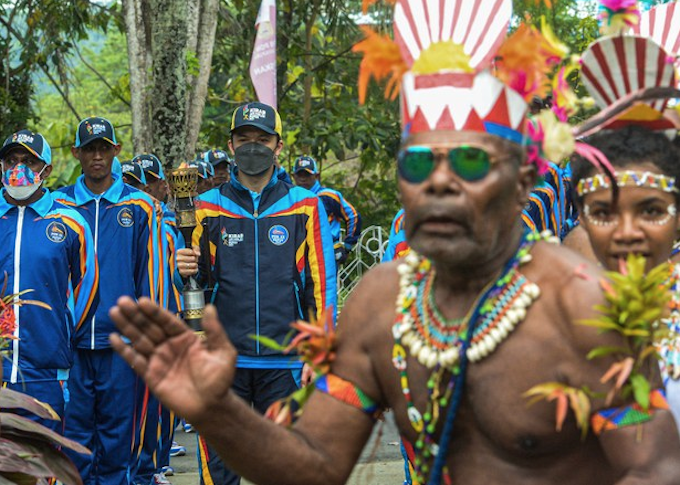 By Victor Mambor in Jayapura

A major national sporting event opened in Papua over the weekend, with officials hoping it will show the Indonesian government’s commitment to developing the province and reassure the public that the region is safe despite an active and growing insurgency in favor of independence.

The National Games, an event held once every four years, was scheduled to take place last year but has been postponed due to the covid-19 pandemic.

The games opened on Saturday and run through October 15 in Jayapura, the provincial capital, and in three regencies.

Billy Mambrasar, a Papua-born adviser to President Joko “Jokowi” Widodo, said the government hopes the games will help boost the economy in the deeply impoverished region.

“The National Games in Papua, as Pak Jokowi hopes, will be successful not only in terms of sporting events and organization, but also by creating a multiplier effect,” he told reporters.

Mambrasar said he had traveled across Papua to ensure Papuan small businesses were involved in organizing the games.

‘Economic impact’
“It has had an economic impact on the communities,” Zainudin said in a statement posted on the ministry’s website.

“People sell T-shirts and souvenirs. Moreover, the situation here is under control.

Papua won the right to host the games in 2014, outbidding the provinces of Bali and Aceh. A total of 7,039 athletes and officials descended on Papua for the country’s biggest sporting event, in which competitors compete for medals in 56 sports.

The games take place at sites in the city of Jayapura and three regencies – Jayapura, Merauke and Mimika. Some events, including esports, started last week.

The director of the National Counterterrorism Agency (BNPT) expressed optimism that the games would go off without incident, saying the insurgency was “hundreds of kilometers away”.

“The army and the police have taken the necessary security precautions, so we are optimistic that all events will go well,” Boy Rafli Amar said in a video interview with detik.com.

More than 21,000 police officers and soldiers have been “deployed to prevent any disturbance of security and public order,” said the head of the national police, General Listyo Sigit Prabowo.

Hope “safe and gentle”
“What we hope is that the games run smoothly and safely, while covid-19 remains under control,” Listyo told reporters after visiting sports venues in Papua on Thursday.

The areas where the games take place are generally peaceful. But insurgency-related violence has erupted in other parts of the region which includes the provinces of Papua and West Papua, and which make up the western half of the island of New Guinea.

In September, suspected rebels burned down public buildings, including a dispensary and a primary school in Kiwirok district, after security forces killed an insurgent in a shootout, police said.

A 22-year-old nurse died after falling into a ravine while trying to flee the scene of the attack. One of his colleagues survived after being stabbed.

A policeman and a soldier were also killed in clashes with rebels.

The insurgency has been brewing for decades in the Papua region, but violence has escalated over the past three years.

In April, the government branded the pro-independence rebels “terrorists” after insurgents ambushed and assassinated an army general who headed the regional branch of the National Intelligence Agency. The murder prompted Jokowi to order a crackdown.

Some unhappy local businesses
Jayapura Regent Mathius Awoitauw said the games could be a once in a lifetime experience.

“The National Games are a source of pride for the Papuans because it is extraordinary to have been responsible for hosting them,” he said.

But some local businesses, including members of the House of Papuan Indigenous Entrepreneurs (KAPP) and the Papuan Coffee Community, said they had been left out.

“We have had several meetings with the organizers of the games but there has been no progress,” Meky Wetipo, executive director of KAPP, told BenarNews.

“We hope that they will be able to entrust us with 3 tonnes of skipjack, several tonnes of carrots and fruit. But all of these things are done by government agencies.

Denny Yigibalom, a coffee grower and owner of the TIYOM coffee brand, said he had met with local lawmakers to discuss cooperation between coffee growers and the organizers of the games, but there was no had no further communication.

Manufacturers of noken, traditional Papuan bags, expressed disappointment that they had not been enlisted to provide souvenirs for the games, said Cintya Warwe, the manager of the Papua Women’s Market.

Noken promise to purchase
“During a meeting at the end of August with the women of the Meepago noken community, the women complained because the organizers had promised to buy 5,000 nokens. But that didn’t happen, ”Cintya said. BenarNews.

She said she heard that the gaming committee wanted to buy 25,000 fakes nokens from outside Papua to serve as souvenirs.

However, some small indigenous businesses are participating in the events by setting up tents to sell handicrafts outside the new Lukas Enembe stadium, the construction of which cost nearly $ 1 million and bears the name of the incumbent governor of Papua.

Individual residents were also allowed to set up stalls outside the stadium and sell handicrafts and betel or areca nuts, which are traditionally eaten raw by Papuans and the people of Papua New Guinea. – Neighboring Guinea.

In Merauke, the women of the Marind tribe sell handicrafts including bags, hats, wallets, bracelets, necklaces and bows on the streets of the city.

“Sales are worth up to 3 million rupees (US $ 210) per day. Bags, wallets and hats are the most popular. Most of the buyers are contingents from outside Papua, ”said Maria D. Keimawu, leader of a small business association.

Concerns related to Covid-19
The provincial government, meanwhile, has taken steps to prevent the spread of covid-19 during games, including stepping up vaccinations and limiting the number of people who can enter the main stadium to less than 10,000, said officials.

“Gatherings of large numbers of people, even with strict health protocols, should be of concern,” said Masdalina Pane, member of the Indonesian Association of Epidemiologists.

She said cases had increased after the recent Tokyo Olympics and the European Football Championship.

Yunus Wonda, the chief organizer of the games, said more than 50% of people in regions that host the games have received at least one dose of the vaccine.

“We will ensure that everyone entering the site has been vaccinated, this is the main requirement,” he said, referring to the opening ceremony at Lukas Enembe stadium.

Victor Mambor is editor-in-chief of Tabloïd Jubi and contributor to Asia Pacific Report.