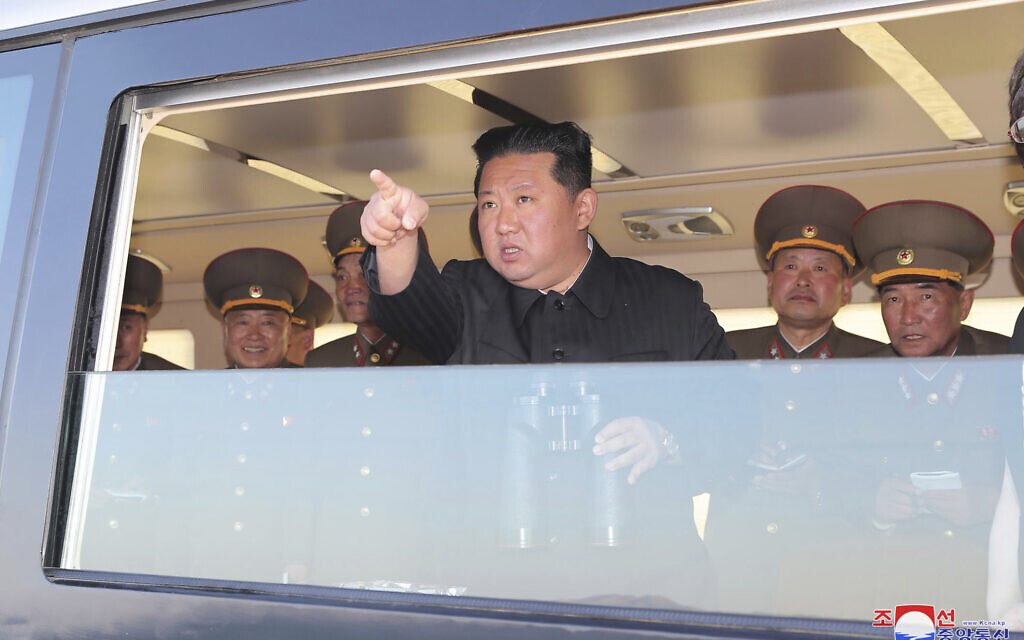 “We will continue to take steps to strengthen and develop our country’s nuclear capabilities at the fastest pace,” Kim said, according to a transcript released by Korea’s official Central News Agency.

According to KCNA, Kim delivered the speech Monday night at a parade marking the 90th anniversary of the founding of the Korean People’s Revolutionary Army at Kim Il Sung Square in Pyongyang.

North Korea is under biting international sanctions for its nuclear weapons program, and repeated negotiations to convince Kim to end it have come to nothing.

Kim said on Monday that the country’s nuclear weapons were “a symbol of national power” and that the country would “further strengthen and develop our nuclear force at the highest possible speed.”

Pyongyang has carried out more than a dozen weapons tests this year, including firing a full-range intercontinental ballistic missile for the first time since 2017.

People walk past an exhibition marking the 90th anniversary of the founding of the Korean People’s Revolutionary Army in Pyongyang on April 25, 2022. (KIM Won Jin / AFP)

North Korea had suspended long-range and nuclear testing while Kim met with then-US President Donald Trump over doomed diplomacy, which collapsed in 2019. Talks have since been held at dead point.

US and South Korean officials and analysts have warned that Pyongyang could soon resume nuclear weapons testing for the first time since 2017.

Satellite imagery has shown signs of new activity in a tunnel at the Punggye-ri nuclear test site, which North Korea says was demolished in 2018 ahead of the first Trump-Kim summit.

KCNA reported that Kim oversaw a huge military parade on Monday, featuring paratroopers, demonstrations of the country’s biggest and most powerful missiles and thousands of troops marching together.

In a speech at the major event, Kim said that while the primary role of the country’s nuclear weapons is deterrence, they “cannot be tied to a single mission.”

“If any force tries to usurp the fundamental interests of our country, our nuclear force will have no choice but to carry out its second mission unexpectedly,” he said.

KCNA said the parade showcased the North’s most sophisticated weapons, including the Hwasong-17, which it claims it successfully tested on March 24.

This undated photo provided on April 17, 2022 by the North Korean government shows a weapon firing at an undisclosed location in North Korea. (Korean Central News Agency/Korea News Service via AP)

At the time, state media trumpeted the “miraculous” launch of what they claimed was the Hwasong-17, releasing spectacular photos and videos of leader Kim personally overseeing the test.

But analysts identified discrepancies in Pyongyang’s account, and South Korean and US intelligence agencies concluded that North Korea had in fact fired a Hwasong-15 – a less advanced ICBM it had previously tested in 2017.

Seoul-based specialist site NK News published photos believed to be from the official Rodong Sinmun newspaper showing a Hwasong-17 missile during the parade.

North Korea holds military parades to mark important holidays and events, often featuring thousands of goose-stepping troops followed by a cavalcade of armored vehicles and tanks and culminating with the key missiles that Pyongyang wants to display.

We tell a critical story

Israel is now a much bigger player on the world stage than its size suggests. As a diplomatic correspondent for The Times of Israel, I am well aware that Israel’s security, strategy and national interests are always under scrutiny and have serious implications.

It takes poise, determination, and knowledge to accurately convey the story of Israel, and I come to work every day aiming to do just that.

Financial support from readers like you allows me to travel to witness both the war (I have just returned from a report in Ukraine) and the signing of historic agreements. And it keeps The Times of Israel the place readers around the world turn to for accurate information about Israel’s relationship with the world.

If it’s important to you that independent, factual coverage of Israel’s role in the world exists and thrives, I urge you to support our work. Will you join the Times of Israel community today?

You are a dedicated reader

We’re really glad you read X Articles from The Times of Israel over the past month.

That’s why we started The Times of Israel ten years ago – to provide discerning readers like you with must-read coverage of Israel and the Jewish world.

So now we have a request. Unlike other media, we don’t have a paywall in place. But since the journalism we do is expensive, we invite readers to whom The Times of Israel has become important to support our work by joining The Times of Israel community.

For just $6 a month, you can help support our quality journalism while benefiting from The Times of Israel WITHOUT ADVERTISINGas well as access Exclusive content only available to members of the Times of Israel community.

Thanks,
David Horovitz, founding editor of The Times of Israel