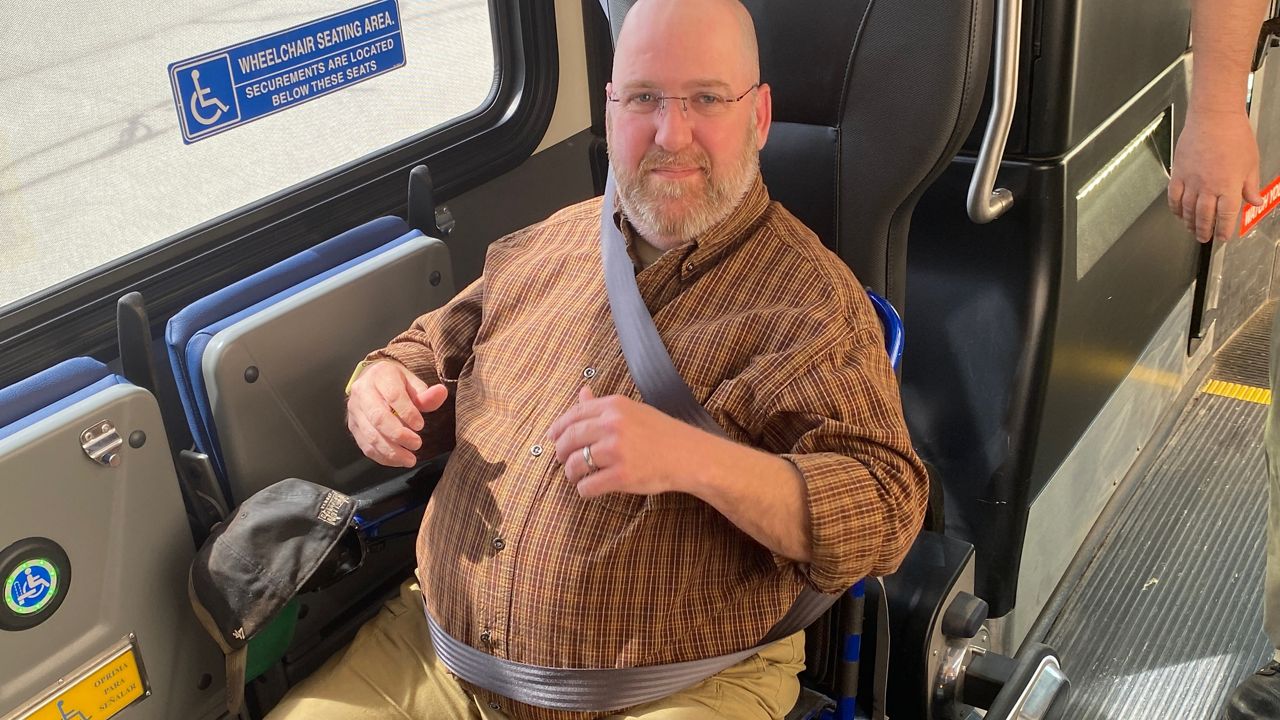 OSHKOSH — Adam Bellcorelli says the new technology being added to GO Transit buses is a win for him and a win for the city’s bus drivers.

And Bellcorelli loves win-win as much as anyone.

What do you want to know

“Being able to get on the bus and not have to jump the driver and get on the floor and do the ratchet straps, or when it’s winter the floor gets a little muddy or dirty, so I feel better for them,’ ‘ said Bellcorelli, a 17-year Oshkosh resident. “And I just tell them where I’m going to stop, and then I jump on it and press the button, and it makes me feel safe. It’s independence and it’s a lot of fun to use.”

The independence that Bellcorelli talks about comes from something called Quantum Safety Technology, a device that allows passengers in wheelchairs and mobility devices to have complete independence when traveling on city buses.

“It gives independence and safety, really the two main issues, for people using the bus with mobility aids,” said Steve Tomasik, director of operations for GO Transit. “They can get on the bus on their own and the device secures the wheelchair for them.”

Tomasik said the devices were installed to fill a need as riders and drivers became concerned during the COVID pandemic.
“Everyone was scared of how this was all going to turn out,” he said. “You can’t keep six feet away if someone is reaching out to help you secure your device.”

GO Transit has upgraded 12 of its buses at a cost of $180,000, Tomasik said. Four new buses, which will be delivered later this year, will already have the technology installed.

Tomasik said new air purification systems have also been added to all GO Transit buses. They also added a cashless payment system, in which passengers download an app on their mobile phone, buy tickets online, and then show their phone to the driver when they board.

“And the good things about this system are, let’s say you go over a bump or (the bus) takes a turn or whatever, that, along the way, will readjust itself to make sure you’re still stuck, “said Tomasik.

Tomasik said the option will remain for passengers with mobility devices to be strapped in the old fashioned way, as the new system requires the passenger to face the back of the bus.

“I really like it,” Bellcorelli said of the opposite direction. “I didn’t think I would at first because normally I ride, when I was in the old system I used to ride the other way. But because you put your back against the pad, you feel so safer. So, yeah, I like it. I found it more comfortable to ride that way,” he said.

Bellcorelli said that, based on discussions with other cyclists equipped with mobility devices, the new technology is a success.

“People love it,” he says. “The more you can do it on your own, the less you feel like you have to rely on someone else to do things for you.

“It makes all buses much more accessible and much more fun to use.”