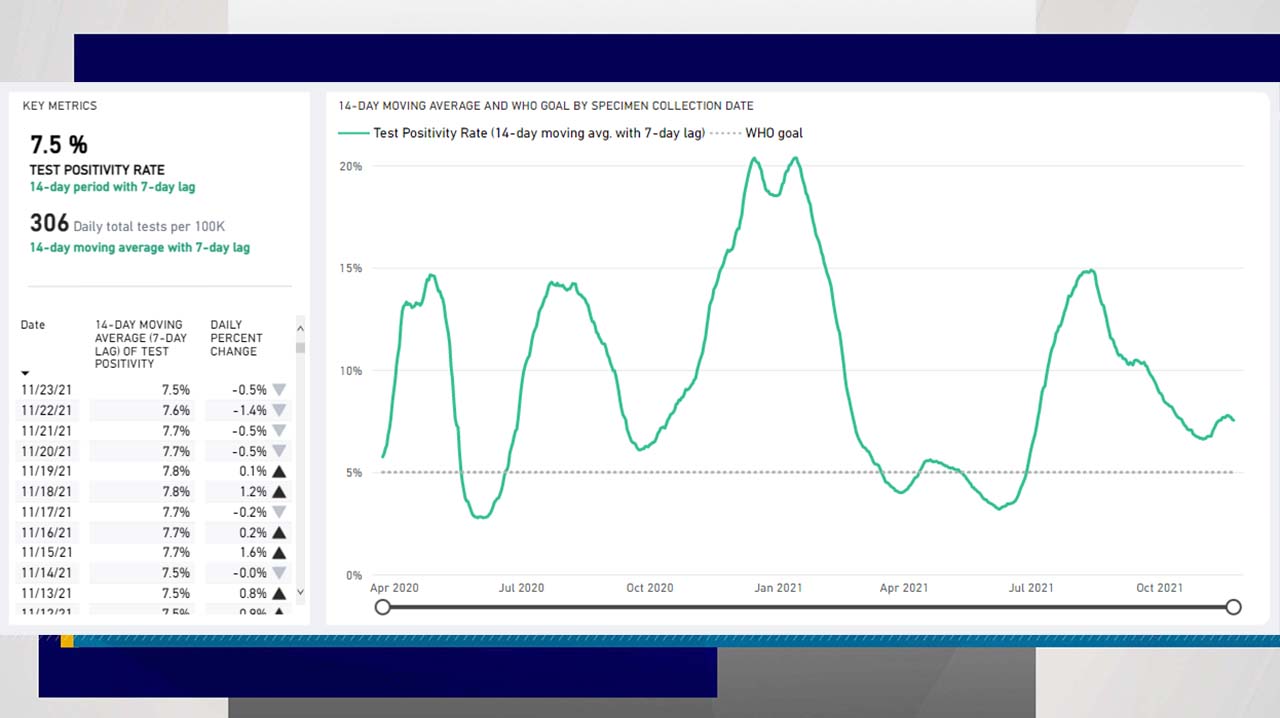 Below is the full COVID-19 report for November 23.

An overview of the current COVID-19 figures:

The state is following the Centers for Disease Control and Prevention guidelines on the mask rule. The mandate will remain in place in each county until the following conditions are met:

As of November 18, the Southern Nevada Health District reports that there are 202 revolutionary deaths (+7), 652 revolutionary hospitalizations (+45) and 12,898 revolutionary cases (+773). (The increases are compared to numbers reported on November 11.)

Yesterday, a total of 5,530,963 COVID-19 tests were performed in Nevada, with an increase of 9,782 since the previous day’s report. The number of reported tests has increased as more employers require employees to be vaccinated or undergo weekly tests.

* NOTE: Daily lab data from DHHS and SNHD reports is updated every morning for the previous day.

The test positivity rate in Clark County has fallen below 8%, removing the county from the state’s watch list for high transmission risk. If the county can maintain positivity and testing levels of testing, state restrictions – including mask requirements – could be relaxed. A separate measure of the county’s case rate – currently ‘high’ at 122.2 cases (per 100,000 population in the past seven days) – must fall below 50 for two consecutive weeks before the mask’s tenure can take end.

In today’s report, eight of Nevada’s 17 counties are still reported for high transmission.

To date, 52.12% of Nevadans currently eligible for the vaccine are fully vaccinated and 61.11% of the eligible population has started vaccinations. Clark County reports that 51.36% of its eligible residents are fully immunized.

The percentages fell in reports starting Monday, November 23, indicating that they have been adjusted to include children aged 5 to 11, who are now eligible for vaccination.

DISTRIBUTION OF HOSPITALIZATIONS IN NEVADA

NOTE: The state does not update hospitalization data on weekends or public holidays.

According to the state Department of Health and Human Services (DHHS), the number of hospital patients in Nevada was UP (+18) of the last report.

The current number of hospitalizations is 719 confirmed / suspected cases. Hospitals reported that 172 of these patients were in intensive care units and 111 were on ventilators. To give you an idea, the state set an inpatient record on Dec. 13 with 2,025 cases.

The number of people who have recovered from the virus in southern Nevada continues to increase. The county’s latest update estimates a total of 325,319 recovered cases; that’s 95.1% of all reported cases in the county, according to The latest SNHD report.

The health district offers a daily card with the number of positive tests in each postcode in Clark County.

Nevada reopened to 100% capacity on June 1 and social distancing guidelines were lifted, helping the state return primarily to pre-pandemic times, with a few exceptions.

The CDC turned the tide on July 27, saying fully vaccinated Americans in areas with “substantial and high” transmission should wear masks indoors when in public as COVID-19 cases increase . Most of Nevada falls into these two risk categories.

Nevada has said it will adopt the CDC guidelines with the new mask directive that went into effect at 12:01 a.m. on July 30. This replaces the Clark County employee mask mandate, which went into effect in mid-July.

On August 16, Governor Sisolak signed a new directive that allows fully vaccinated participants at large gatherings to remove their masks, but only if the venue chooses to require everyone present to provide proof of vaccination. Those with only one injection and not “fully immunized” would still be allowed to attend, as would children under 12, but both would have to wear masks.

Masks should always be worn when required by federal, state, local, tribal or territorial laws, rules, and regulations, including local businesses and workplace guidelines.

State approval for immunizing children aged 5 to 11 was given on November 3, and the Southern Nevada Health District plans to begin immunizations on November 10. The Pfizer vaccine is the only vaccine approved for children today.

SEE ALSO: report of the day before