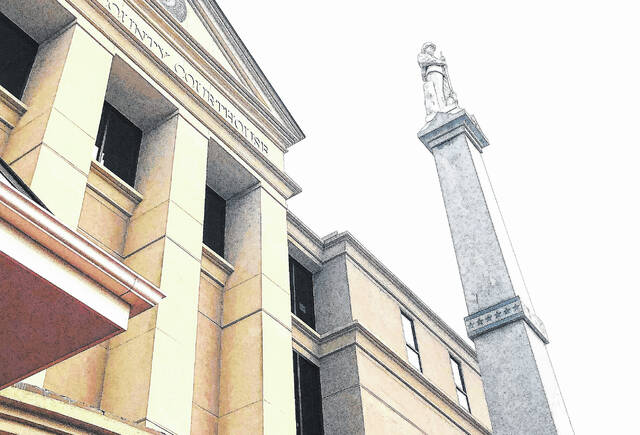 LUMBERTON – “My question for you is how can we evolve as a county, move in the direction of equality, which is the only way to bring unity to Robeson County and we still idolize the dark history that caused so much pain and division by allowing this statue to stand in front of the people’s house?

Those were the words of the Reverend Tyrone Watson Sr., president of the Unified Robeson NAACP branch, to Robeson County commissioners during the public comment section of a regular meeting of the board of commissioners on Monday. Watson was speaking from the Confederate statue at the entrance to the Robeson County Courthouse.

The monument, a large marble obelisk with a soldier in his prime, has stood in front of the courthouse since its unveiling on May 10, 1907.

The statue received applause from local residents and Confederate veterans, according to a Robesonian article published after the unveiling. It was vandalized in 2017, but cleaned up soon after.

Watson said the local NAACP group was not asking for the statue to be destroyed, but for it to be moved.

“Obviously this statue is a poor reflection on Robeson County and what Robeson County should be and it is a house where all men, regardless of nationality or race, should be treated the same way,” he said.

“We are in no way trying to suppress the history the statue represents, it’s just that we don’t believe what it represents should be glorified whereas for some it may bring honor and for others others it can bring humiliation,” added Watson.

More than 10 people stood up when Watson asked how many members of the public supported moving the statue.

Reverend Leslie Sessoms also spoke out in favor of moving the statue.

“It’s my legacy,” she said. “My roots go back to the Revolutionary War.”

Sessoms said his great-great-grandfather Gilbert P. Higley fought in the Civil War and was a Confederate soldier. He was part of the “Immortal 600”, which included soldiers imprisoned by the Union Army.

“It’s not easy for me tonight to stand in front of you and say that I recognize the need for this to happen,” she said.

“…I believe we need healing in this county and I believe the only way to move forward and have healing is to acknowledge the generational trauma and acknowledge it, not ignore it, but to handle it,” she added.

Steve Taylor’s great-great-great-grandfather was a Confederate soldier who died in the war. He also said that a relative had owned slaves.

“It was a heinous system and the monument in front is a monument to that system which was held in place by violence, violation and horror,” he said.

“We should remove this statue. It’s a – it’s a memory of a time when the worst of us came out and I say that as a direct descendant of those who perpetrated this. It gives me no pleasure to say this, but it’s the truth,” Taylor said.

Wixie Stephens, chairwoman of the Robeson County Board of Commissioners, thanked members of the public for their comments.

“I want to thank each and every one of you on behalf of this council,” she said. “I want to thank you all for your passionate testimony and we encourage you and want to assure you that we will take this all under advisement.”

No action has been taken on this.

Commissioner Pauline Campbell, who is African American, told The Robesonian after the meeting that the case is not “a black or white thing”, but “it is a matter of citizens of Robeson County”. .

“I feel like if the citizens of Robeson County want the statue removed, the county should go ahead,” she said.

Conversely, curators Tom Taylor and David Edge stood by their previously shared views with The Robesonian in 2017.

“I don’t see how that hurts anything,” Commissioner Taylor said.

He also spoke of a state statute that protects these monuments.

“My opinion hasn’t changed,” said Edge, who joined the meeting by phone.

In other cases, the commissioners also approved the addition of the June 19 public holiday for county employees.

June 19, which takes place on June 19, became a federal holiday when President Joe Biden signed it into law in June 2021. The holiday celebrates the end of slavery in America. County employees will now have paid leave on that date.

Carol Richardson, a community activist and Robeson County resident, said she was thrilled with the vacation’s approval.

She requested attendance and financial support from county commissioners for a June 19 celebration in Lumberton.

The four-day celebration begins June 16 and ends June 19, she said.

Commissioner Campbell told commissioners she had received phone calls from residents who had requested that an all-way stop be placed at Turkey Branch Road and NC 41. Campbell told the Robesonian after the meeting that the concerns were centered on car accidents in the region.

Commissioner Judy Sampson said a meeting will be held at the Union Chapel community building on February 28 at 7 p.m. and the Lumbee Tribe Chairman will attend the meeting.

— An application for a special permit from Brenda Locklear, of Rennert, to permit the establishment of a family cemetery in a residential agricultural district on Liberty Park Road

— An application for a special permit from James Chavis, of Philadelphus, to permit the establishment of an auto and body shop in a residential agricultural district on Lewis McNeill Road

– A resolution to accept an offer of $2,000 plus the cost of advertising for real estate on NC 130 near Fairmont

– A resolution to announce bids for surplus property at $3,600 for parcels located on Rennert Road, at Morgan J Road and Second Street, and Pine Street

The next meeting of the Council of Commissioners will take place on March 7 at 9 a.m.