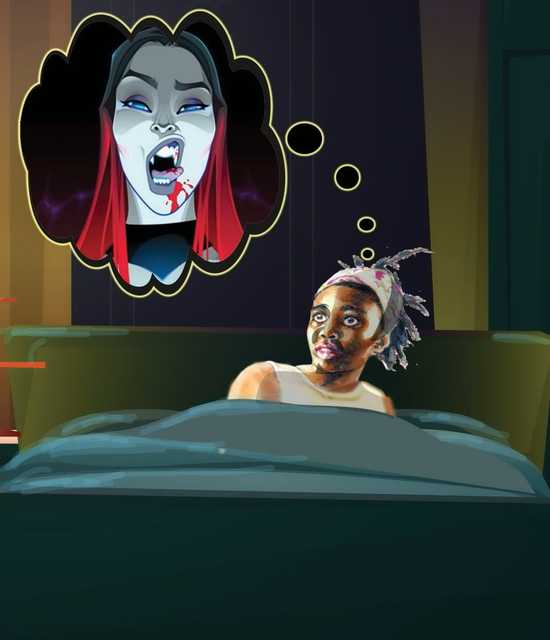 LITTLE STORY: What a hectic night like no other

Jackie’s eyes snapped open and she stared unblinkingly into the still darkness that surrounded her. As her eyes adjusted and the outlines of the various pieces of furniture that dot her room slowly became clear, she wondered what had woken her up. It was so quiet that she could hear her heart beating against the soft mattress. There was a calming rhythm, a thud, a thud, a thud.

Her eyelids fluttered and her eyes started to recede in her head as sleep came to claim her, but just as she was about to crawl into his arms, a dog barked so loudly that Jackie jumped as if she had fallen. bed. Sitting up, she muttered an incredibly rude word several times under her breath. Sleep, fleeting as it sometimes was, had fled. Jackie reached for her phone on the nightstand and glanced at it, it was 3am.

She was thirsty and she needed to go to the bathroom, so she extricated herself from under the covers and slipped her feet into slippers which squashed gently under her feet. Walking silently to the bathroom and then to the kitchen, Jackie was back within minutes, crawling quickly into the warmth of her bed.

She sipped her lukewarm water in the dead silence, twisting her fingers. She was due to be at work in a few hours and she was exhausted despite her insomnia. Mentally, she could hear the countdown of the time remaining before dawn. And why was this dog so quiet now? Probably back to sleep, she thought irritably.

Long shadows danced on the walls as a light breeze from a half-open window stirred its curtains. Jackie watched them as her mind drifted from thought to thought, each barely forming before the next began to take shape. She better remember to buy some rice, she was almost out and she was having dinner this weekendâ€¦ or did she have an extra bag in the store? No, it was pasta, she had plenty of it, she loved itâ€¦ oh, like the pasta she had on vacation, sprinkled here and there with succulent pieces of seafood and a thick, creamy sauceâ€¦ and by the way, would she make her special sauce for the dinner she was planning? Because she was sure she didn’t have any fresh garlic. And as she mentally imagined a bulb of garlic, seeing it hanging over her bed, she burst out laughing at the stupid reference her mind made to fictional vampires being repelled by garlic. Where did it even come from? Too many movies, she decided, plus her mind circling around this ungodly hour of the night.

“Besides, they can’t come in uninvited,” she mumbled, laughing harder at the absurdity of his thoughts, then suddenly straightened up. She couldn’t remember if she had locked the doors. Not against vampires, that was silly, but right? Jackie sighed. Now she had to go check it out, she would never fall asleep if she didn’t. So, slipping into her slippers again, she trudged down the stairs, checked the two doors and all the windows for good measure, began to climb the stairs when a throbbing feeling brought her back to the kitchen to check the stove and the kettle were turned off; before going back to bed. It was 4 am and Jackie closed her eyes determinedly. She hoped that if she kept them closed long enough, she would fall asleep. She had to.

The night was pleasantly cool, with the slightest breeze barely rustling the leaves of the large trees blooming in her neighborhood. The soft sounds rocked her, so much so that Jackie felt her body sink deeply into the mattress, relax, melt into nothingness as she driftedâ€¦

â€œHey! See what we have here! a woman’s voice cut the quiet black veil of sleep that enveloped Jackie.

“Shhh! You’ll wake up the neighborsâ€¦ â€answered a deeper voice, albeit shrill with stress.

” Oh ! The woman shouted into the night, “You’re not concerned with my sleep, just the neighbors, are you?” You wake me up then say hush ?! â€There was a pause, presumably as she drank some air, and the man took this golden opportunity to argue his case.

“Come on honey”, her voice was honey and butter, “I got caught by curfew, you know how early it is 10pmâ€¦ I told you I had a late date, is not it ? He didn’t give her a chance to respond, “So I crashed into Kevin’s place and …”

A door creaked as it opened and then slammed, the argument fading away as the couple argued inside, leaving Jackie to stare at her ceiling, chewing the inside of her cheeks angrily. It was five in the morning now. She could tell because the birds were starting to sing shyly. The sky was clearing too, the darkness was dissipating subtly but visibly. Jackie spread her fingers across the fluffy mattress and wiggled them back and forth.

Her eyelids were heavy and her mind exhausted, so lethargic she felt drugged, but sleep no longer flirted with her. He walked over, then danced away, pursued with intrusive thoughts as she began to plan her day. She was using the bypass, she wasn’t in the mood to sit in trafficâ€¦ by the way, did she have enough fuel? If she didn’t, she would have to take another roadâ€¦ but was that road still open? She would text her friend and ask herâ€¦ Oh! And also invite her to the dinner she was having, she better not forget to buy rice …