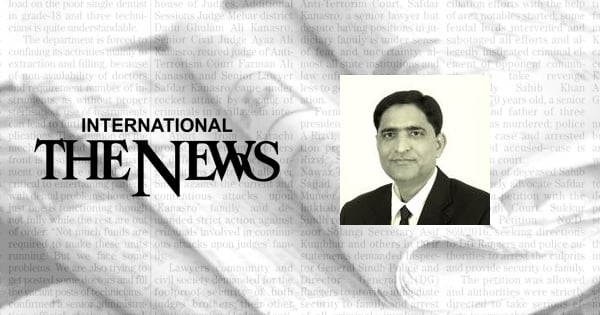 By appointing Judge Ayesha A Malik as the first female judge of the SC, the Chief Justice of Pakistan has sought to promote judicial independence. However, a section of the bar and some members of the Pakistan Judicial Commission resisted the elevation of Judge Ayesha Malik, asserting respect for the principle of seniority to ensure the independence of the judiciary.

I understand that the seniority principle is another mechanism to ensure independence from the kind of political interference Pakistan has experienced in the past. But, despite its merits, this mechanism is not perfect. It has its own pitfalls – like not focusing on “competence”. Moreover, if seniority is to be the only criterion, then what is the need for a Judicial Commission? There must be discretion with the JC (although structured) in the appointment to the SC.

Those who opposed the appointment specifically argued that only the highest judge of a high court could be elevated to the rank of CS. They argued that the elevation of Judge Ayesha Malik in defiance of the principle of seniority would have been unconstitutional. I examine this argument on the basis of the constitution, the history of judicial appointments in Pakistan, and the constitutional principle of discrimination.

As for discrimination against female judges, suffice it to say that Pakistan is the only country in South Asia where a female judge has never been appointed to the SC. With the appointment of Judge Ayesha Malik, it was hoped that we would provide representation and space for an honorable female judge in the Supreme Court, who even qualifies otherwise based on her experience, judicial performance, independence and her integrity.

Women judges have performed well in other jurisdictions (Brenda Hale (UK), Sandra Day O’Connor and Ruth Bader Ginsburg (USA)). India recently appointed three female judges to the SC. By refusing the elevation of Judge Ayesha Malik, despite her competence and integrity, Pakistan has missed a historic opportunity. It is also a violation of article 25 of the constitution, which guarantees the equality of all citizens without any discrimination on the basis of sex. It obliges the state to take positive measures for the protection of women.

It is worth remembering the words of Muhammad Ali Jinnah: “No nation can be worthy of its existence if it cannot take its women with the men. No struggle can ever succeed without women participating alongside men. There are two powers in the world; one is the sword and the other is the pen. There is great competition and rivalry between the two. There is a third power stronger than the two, that of women ”. But we don’t seem to recognize and appreciate this third power. According to the World Bank’s 2020 Development Indicators, women make up 48.54% of Pakistan’s total population. How can a country progress, according to the vision of Jinnah, which denies merit and the rightful place to so many women?

Apart from the principle of seniority, the competence and integrity of a judge cannot be totally ignored. To improve the performance of our judicial system, we need to take a balanced approach that both encourages the independence and values ​​the capacity of judges. Blind respect for the principle of seniority and the opaque process for appointing judges has already made the Pakistani judicial system weak and insensitive to the expectations of the population.

CJP Gulzar Ahmed said “no one discussed the merits of the candidate.” Judge Umar Ata Bandial said Judge Ayesha A Malik was known to be “a fiercely independent judge and this is probably the reason why the bar was opposed to her appointment as an SC judge”. Judge Maqbool Baqar stressed the need for democracy, independence and the liberation of women. Judge Sardar Tariq Masood said he was a strong supporter of women’s empowerment, stressing that his only intention was to preserve the prestige of the judiciary.

Democracy, women’s liberation, women’s empowerment and the prestige of the judiciary cannot be achieved with low representation of women in the bench and bar. How to make the judiciary independent while preventing the elevation of independent judges? How can we promote democracy, equality and social justice while denying women proper representation in the justice system?

Members of the judiciary, bar and civil society should support the uplifting of independent women judges in order to make the judiciary independent and inclusive. If the merits of women are not appreciated and if they are not allowed to participate fully in national life, Pakistan will not be able to move forward.

The writer is a lawyer for the Supreme Court.

Hybrid UN leaders, in their own words