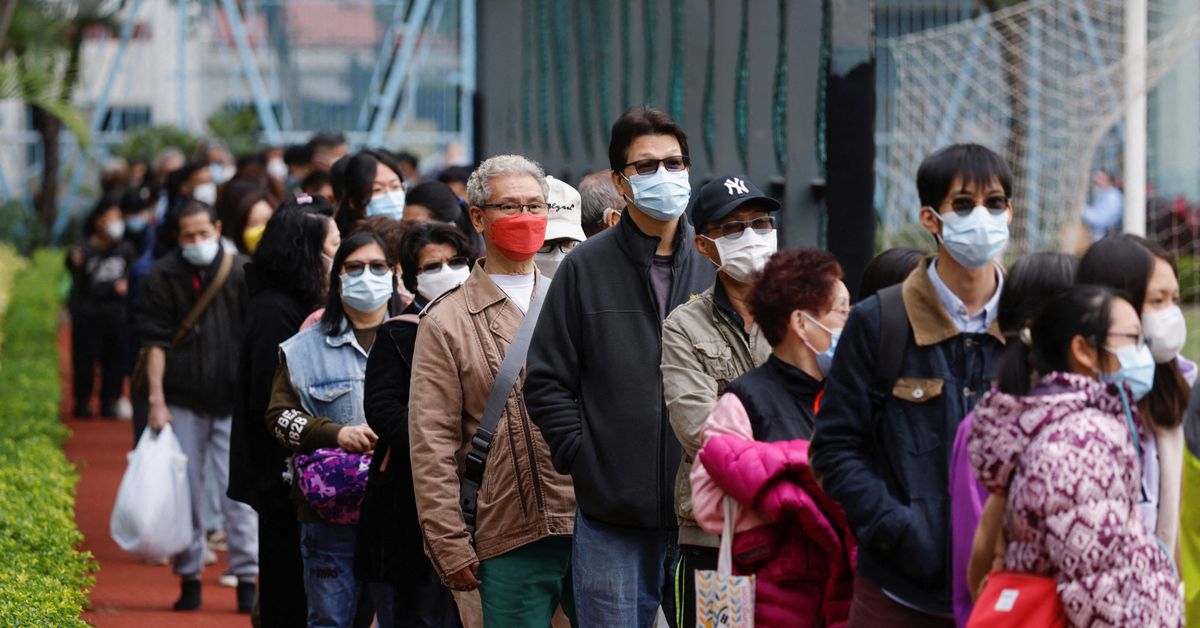 People line up at a community testing center for the coronavirus disease (COVID-19), after the district was identified as a high-risk area, in Tuen Mun, Hong Kong, China January 12, 2022. REUTERS/Tyrone Siu

HONG KONG, Jan 22 (Reuters) – Hong Kong leader Carrie Lam warned on Saturday that COVID-19 infections could grow exponentially in a congested residential area of ​​the city and that overall cases will was also being spread due to an outbreak in pet hamsters.

Chief Executive Lam has urged Hong Kongers to avoid gatherings ahead of next week’s Lunar New Year as officials grapple with an outbreak of the highly infectious Omicron variant in Kwai Chung, north of China. Kowloon Peninsula.

“We fear that the exponential growth in cases that we have seen in other parts of the world is now happening in Kwai Chung,” Lam said.

Speaking after meetings with health officials, Lam said there was only a “slim chance” those citywide restrictions would be lifted on February 4 as planned.

She said a second apartment block in Kwai Chung, housing more than 2,000 people, would be closed for five days.

Authorities closed a first Kwai Chung building for five days on Friday after more than 20 cases were linked to it, with food delivered from outside three times a day and mass testing underway.

On Saturday, authorities recorded some 105 cases in Kwai Chung, including confirmed and preliminary positive tests.

In total, some 16 buildings in the area would face various restrictions and mandatory tests, affecting some 35,000 residents, Lam added.

Local media reported on Saturday that authorities are considering tougher citywide restrictions, but none have been confirmed yet.

On Tuesday, officials ordered the killing of about 2,000 hamsters at dozens of pet stores after tracing a coronavirus outbreak to a worker at a store, where 11 hamsters later tested positive for COVID-19.

Lam said cases involving the Delta variant are also increasing due to the hamster outbreak.

“I understand that pet owners are upset…the greatest public interest is to control the pandemic,” Lam said.

Thousands of people have offered to adopt unwanted hamsters amid public outcry against the government and its pandemic advisers. Read more