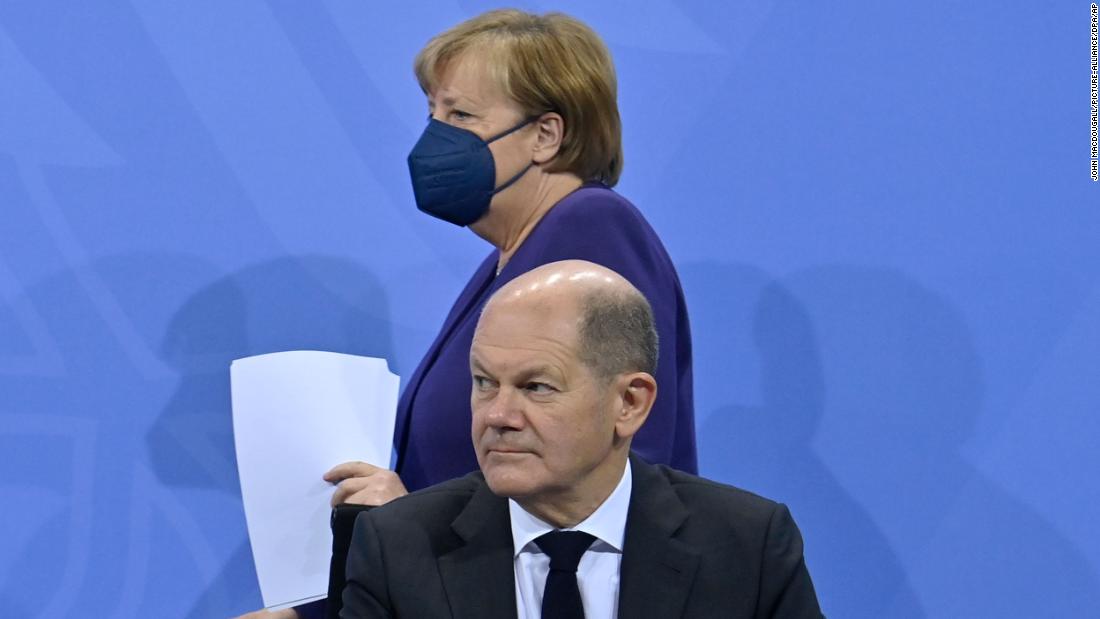 Unvaccinated people will be banned from all but the most essential businesses, such as supermarkets and pharmacies, to curb the spread of the coronavirus, outgoing Chancellor Angela Merkel and her successor, Olaf Scholz, announced Thursday at the following crisis discussions with regional leaders. Those who have recently recovered from Covid-19 are not covered by the ban.

The couple also backed the mandatory vaccinations proposals, which, if passed by parliament, could take effect from February at the earliest.

Under the tightened restrictions, unvaccinated people can only see two people from another household. Bars and nightclubs must close in areas where the incidence rate is over 350 cases per 100,000 inhabitants over a week. And the country would limit the number of people at big events like football matches.

The announcement comes as Germany battles an increase in the number of cases that have pushed Europe to the epicenter of the pandemic, heightening fears over the newly discovered Omicron variant.

The press briefing is also Merkel’s last before she leaves office; a dark note to end her 16 years as German Chancellor.

“We understand that the situation is very serious and that we want to take additional measures in addition to those already taken,” Merkel told reporters at the press conference on Thursday. “The fourth wave must be broken and that has not yet been achieved,” she added.

A nationwide vaccination mandate could come into effect from February 2022 – after being debated in parliament and following guidelines from the German Ethics Council, Merkel said.

She added that those vaccinated will lose their vaccination status nine months after receiving their last vaccine, apparently in an effort to encourage use of the booster.

If approved, Germany’s vaccination mandate would follow in neighboring Austria’s footsteps, which also plans to make vaccinations mandatory for eligible adults from February.

Elsewhere, Greece announced that vaccines would be mandatory for people over 60 from mid-January. Those who refuse to do so face fines of 100 euros (US $ 113) for each month that passes, the government said on Tuesday.

European Union Commission President Ursula von der Leyen said it was time to ‘potentially think about compulsory vaccination’ within the bloc as it faces the double attack of a fourth wave coronavirus disease and concerns over the Omicron variant discovered by South African health officials last week.

“Two or three years ago I never thought I would witness what we are seeing right now, that we have this horrible pandemic, we have the vaccines, the life-saving vaccines, but they are not being used. adequately everywhere, “von der Leyen said at a press briefing on Wednesday.

“How can we encourage and potentially think about compulsory vaccination within the European Union, it requires a discussion. It requires a common approach but it is a discussion which I think needs to be conducted,” he said. -she adds.

Germany, like Austria, has one of the lowest vaccination rates in Western Europe, with 68.4% and 65.6% of their populations fully vaccinated respectively, according to the ECDC.

Germany continues to see a record number of cases, especially in its eastern states. The country recorded 446 deaths linked to Covid-19 on Wednesday – its highest number of daily deaths in nine months.

Many hospitals are struggling to cope with the growing number of intensive care patients. There could be around 6,000 Covid-19 patients in intensive care by Christmas – regardless of the measures implemented by German leaders – the Interdisciplinary Association for Intensive and Emergency Care (Divi) warned on Wednesday. country.

Already, more than 102,000 people in Germany have died from the coronavirus, according to the Robert Koch Institute (RKI), the national center for the fight against diseases.

An earlier version of this story underestimated the number of people fully vaccinated in Germany and Austria. This has been corrected.