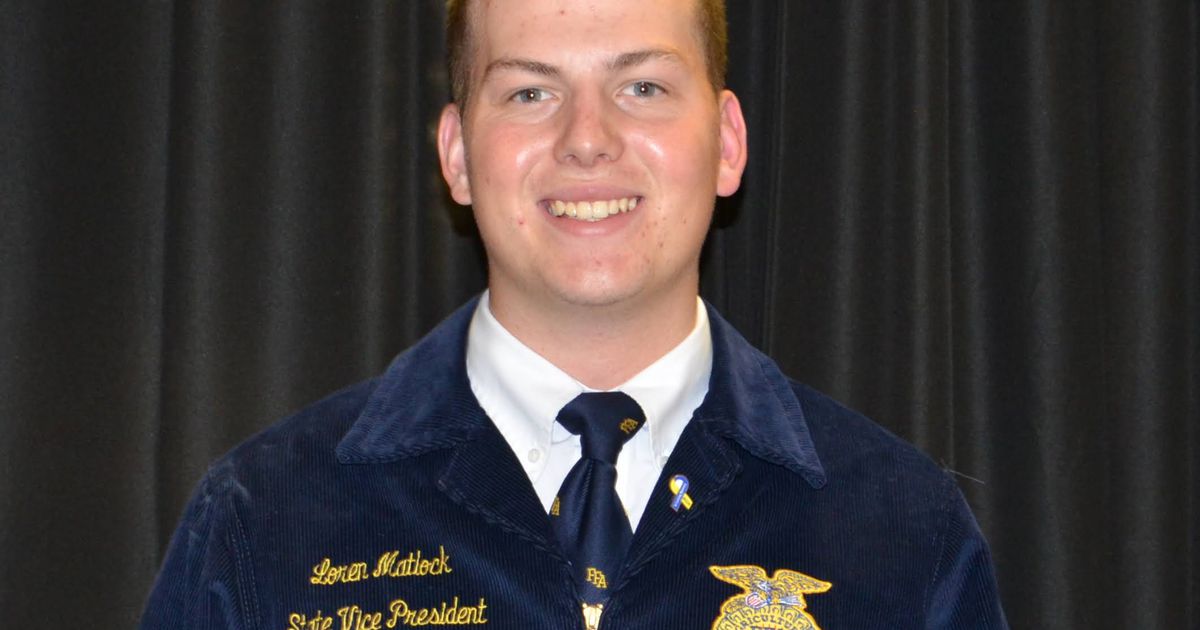 INDIANAPOLIS – Each year at the Indiana State FFA convention, officers from the State of Indiana FFA, who retire at the end of this year’s convention when a new team is elected, have the opportunity to deliver a retirement speech.

The retirement speech is the last chance for state officers to impact Indiana FFA members by inspiring them through something that has had a huge impact on their lives or just a message with a key point that fascinates the officer.

From being a member of the FFA myself and attending the state convention to working for Indiana AgriNews, it is safe to say that I have heard several dozen start addresses at retirement.

During this year’s Indiana State FFA convention, I had the opportunity to listen to a retirement speech that kept me glued to my seat. That opening remarks came from Loren Matlock, Vice President of the 2020-2021 FFA Southern Indiana Region.

Before we dive into Matlock’s opening remarks post, I first want to share a bit of a story about him, including that he’s a big, funny guy who loves cattle.

Now, I have to admit that when Matlock came out with sunglasses and played air guitar on a Dire Straits song, my expectations for his retirement address weren’t very high, but I did. was wrong.

What started out as an air guitar solo quickly turned into a retirement speech about a life and death situation that took Matlock on a personal journey.

Matlock began to tell a story of how he and his family, including his cousins, did a lot of fence building. One fall day, Matlock sat down with his father and cousins ​​to put up fences.

Matlock said to cover more ground he and his cousin went to one area to do fencing, while his father went to another site. He then explained how they came across the common problem faced by children on the farm, which was that the tractor only had one seat, so someone had to sit on the fender.

Matlock took the wing, while his cousin was driving, and they had a witty chat and jokes about who better built the fence. Suddenly everything changed on that cool November day, when Matlock realized he had seen the field, but then noticed that the corn stalks were getting closer and closer, until his skull and face were crushed by the very tractor he had just been on.

Once the tractor was out of him, his cousin ran to see him. Originally he stood up and said he was fine, before collapsing to the floor with blood coming out of his ears, mouth and nose – and even his tears were blood .

His cousin asked him if he was okay, and Matlock replied no and asked him to call his father. His cousin couldn’t reach Matlock’s dad, so he called his dad and told him he had just run over Matlock with the tractor.

When Matlock’s father heard the news, he was six to seven minutes from the crash site, but Matlock swears his father was there in 30 seconds. His father approached him, hugged him and told him he loved him.

Shortly after, paramedics arrived and placed Matlock on a headboard and he was taken by helicopter to Riley Children’s Hospital. After several scans and tests, in addition to a bumped face, the only injury Matlock suffered was a cracked eye socket.

I was already on the edge of my seat, completely captivated by Matlock’s exit speech when he started talking about the reactions he had at school after the accident, as if it wasn’t serious, until someone asks Matlock a life-changing question.

Matlock then explained to members of the Indiana FFA at the convention how one individual asked the question: If today’s accident ended his life, would he agree with that?

Matlock said he initially answered yes, but the question continued to weigh on him and made him think that if he had died that day, would he really agree that before stepping out onto the field, his mom had said she loved him, but he didn’t say it back? Or did he agree that the last conversation with his father had been an argument between the two of them?

Matlock began to realize that it wouldn’t have been right if he had lost his life that November day, and he needed to work on the relationships in his life and not push them away thinking he would. tomorrow, or next week or even the next year to fix them.

The building went completely silent at this point, until Matlock spoke again and said he could tell everyone now that if he died he would be happy with his relationships in life and relationships. with his Lord and Savior Jesus Christ.

He then faced the FFA members and without blinking asked them if they would be okay with their life if the sun didn’t rise tomorrow. He said he almost had to lose his life to be able to answer that question.

Matlock then ended his retirement speech by telling FFA members to live for today because tomorrow is not guaranteed.

As I rose with others in the crowd to give Matlock a standing ovation, it was then that I saw the real impact of his retirement speech on the faces of the FFA members who seemed to have taken his words to heart. I know I did.

THEATER REVIEW: “Title and Deed” is pure and true theater