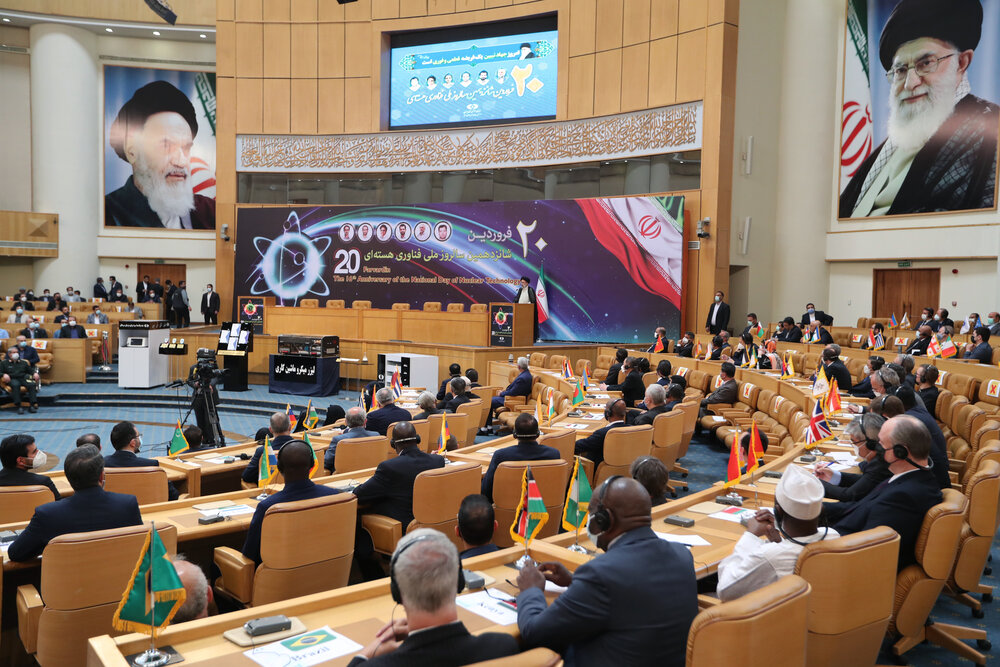 TEHRAN – President Ayatollah Seyed Ebrahim Raisi has said the enemy knows Iran is not seeking nuclear weapons but fears Iran’s independence and might.

“The enemy knows very well that Iran does not seek to build a nuclear weapon and is only afraid of the independence and emancipation of the Iranian people. The government considers it its duty not to back down from the rights of the nation in negotiations,” Ayatollah Raisi said, according to the official website of the Iranian Presidency.

He made the remarks Saturday on the occasion of the 16th national anniversary of Iran’s nuclear industry.

“One of the components of power in the Islamic Republic of Iran are those sophisticated human beings who are educated and willing to take risks,” he said, adding, “Today, despite the wishes of the enemies , relying on the steely will of scientists, the nuclear industry of the Islamic Republic of Iran has made significant progress and, more importantly, this industry has become national for our country.

The President said: “The numerous sanctions, threats and oppressions that have been inflicted on the Iranian nation have not stopped us and will not stop us. The assassination of nuclear industry scientists and the sabotage of nuclear facilities could not prevent the Iranian people from advancing their peaceful goals.”

He added: “The enemies know very well that nuclear weapons have no place in the defense doctrine of the Islamic Republic, and the International Atomic Energy Agency has confirmed 15 times in its reports that no violation has been observed in Iran’s nuclear activities”.

The President continued: “The nuclear activities and equipment of the Islamic Republic of Iran comprise in total about 3% of the nuclear equipment in the world, but 25% of the inspection capacity of the International Agency for atomic energy are allocated to this volume of nuclear equipment. activities, which shows that the (unfounded) concern of the evildoers of the Islamic Republic concerns the acquisition of nuclear weapons by Iran and even the fact that Iran has become powerful and enjoys many achievements in the industry peaceful nuclear.

Ayatollah Raisi said: “Some countries in the region have nuclear weapons, but the enemies have no sensitivity to their nuclear weapons, and this shows that what worries them about the Islamic Republic of Iran is independence and strength of Iran”.

The President added: “Today, despite the wishes of enemies, the country’s young and courageous scientists have shown great abilities in the nuclear industry and their valuable achievements have many applications in various fields of medicine, science and technology. ‘agriculture and industry’.

Ayatollah Raisi said Iran’s will is to defend the inalienable right of the great Iranian nation with all its might. “We will never allow seekers of domination to violate the Iranian nation’s right or to slow or stop Iran’s peaceful nuclear activities, and the path to the increasingly peaceful realization of Iran’s achievements and capabilities. ‘a nuclear power will continue.’

The President said, “The country’s nuclear and military industries have come under more sanctions and pressure than any other area, but we see our country’s most significant progress being made in these areas. The reason for these developments is that our country’s activities in these fields are based on the high and strong will of the young scientists of the Islamic Republic of Iran. »

Stating that the government is seriously pursuing the progress of the peaceful nuclear industry in other industrial sectors as well, including the automotive industry, the President noted: “The government, especially in 1401, whose motto is production, employment and knowledge, will do its best to plan and take action in various industries in the country, especially heavy industries, to take advantage of the capabilities of science and knowledge. »

Referring to the preparation of a strategic document by the Atomic Energy Organization of Iran (AEOI) for the 20-year horizon of the industry, the President said: “The preparation of this document deserves to be appreciated because it proves the existence of ideas and plans in this complex to reach higher horizons.”

He continued, “On National Nuclear Industry Day, which belongs to the great nation of Iran, we announce that peaceful nuclear activities, based on creativity and innovative measures, will continue to evolve towards increasing progress.

Imran Khan ousted as Pakistani leader in vote of no confidence