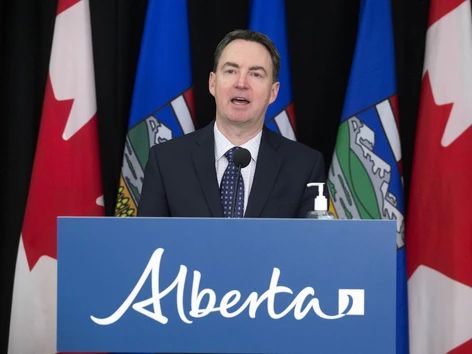 Test positivity rates and virus levels found in sewage tests have continued to rise in Alberta over the past week, but the province’s health minister said it “remains to be seen. » how this will translate in terms of serious illnesses and hospital admissions.

Alberta’s average test positivity rate from March 29 to April 4 was about 26.3%, a slight increase from the 24.5% reported the previous week, Health Minister Jason Copping said. during last Thursday’s COVID-19 update. He added another leading indicator, sewage test data, shows there are more viruses circulating in a number of regions.

“It’s not a spike that we saw in late December and early January and in some centers we see the data fluctuating around the level that is between the extremes of the last two months,” Copping said. “It is a concern and we are monitoring it closely.”

Dr. Deena Hinshaw, Alberta’s chief medical officer of health, said that given the transmissibility of BA.2, the province’s dominant strain of COVID-19, and rising trends in sewage levels and test positivity, Albertans can expect to see a further increase in cases in the days and weeks to come.

“I encourage every Albertan to keep this in mind as we continue with our routines and activities in the days ahead,” Hinshaw said. “I encourage you to get free rapid tests from your local pharmacy and keep them on hand if you, or someone in your household, develops symptoms.”

Albertans aged 70 and over, First Nations, Métis and Inuit aged 65 and over, and all seniors in congregate care, regardless of age, will be eligible for a fourth dose of a COVID-19 vaccine from Tuesday, the province announced last Wednesday in a news release.

Also, starting Tuesday, Albertans will have more vaccine options with 10,000 doses of Novavax’s Nuvaxovid set to arrive in the province. Nuvaxovid is a two-dose protein subunit vaccine that does not use mRNA technology and is approved for people 18 years of age and older.

In addition to expanded eligibility for fourth doses, the province is expanding eligibility for Paxlovid treatment to First Nations, Métis and Inuit people ages 45 and older who are unvaccinated or who have received only one dose of a vaccine and to Albertans living in long-term care facilities and designated supportive living settings, regardless of their vaccination status.

“We are well positioned to manage some increase in admissions if we see this, and Albertans have access to vaccines and antiviral treatments to protect against serious consequences,” Copping said in the statement. “I encourage everyone to get vaccinated with every dose you are entitled to and to stay home if you are not feeling well.”

The number of cases in the province is likely much higher due to the large number of Albertans using rapid, unreported home tests.

Copping said people can expect some increase in admissions over the next few weeks, but the health care system is well positioned to handle the uptick.

“First, we have strong protection against our high level of vaccination and exposure to the initial wave of Omicron about three months ago. And second, our healthcare system is heading into April with a total number of patients admitted that are within normal levels for this time of year,” said Copping, who added that overall hospital occupancy is currently around 90% – similar to the same time of year during five years before COVID.

Copping said a few large sites in Edmonton and Calgary are overcapacity, but that’s consistent with pre-COVID experiences as well.

-with files by Kellen Taniguchi

Is Victoria leaving The Young and the Restless?