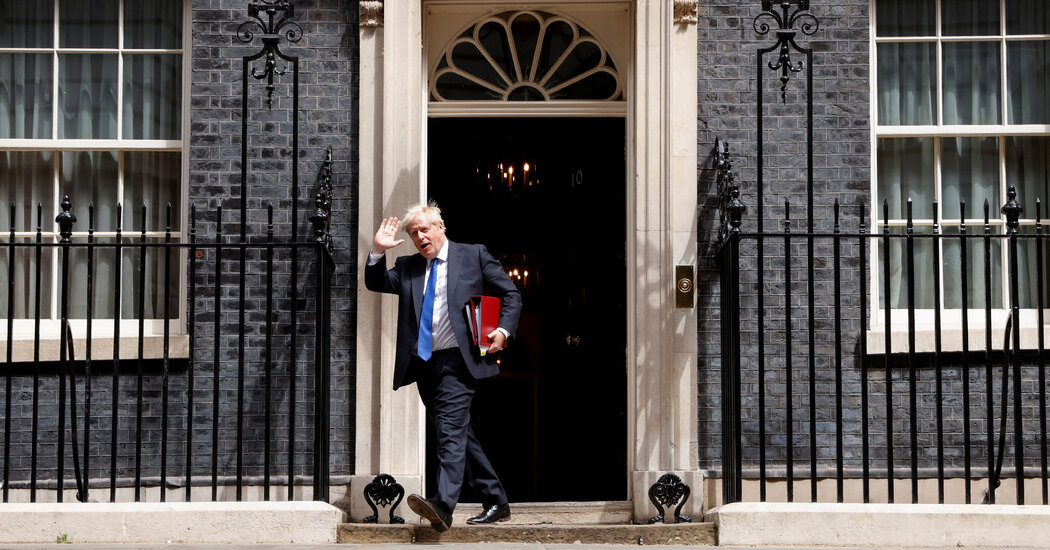 LONDON — British Prime Minister Boris Johnson will step down as leader of the Conservative Party on Thursday after a massive cabinet rebellion, a wave of government resignations and a devastating loss of support for the party, sparked by his handling of the latest sex and party bullying scandal.

Mr Johnson plans to remain in the role of prime minister until a successor is in place, likely in the fall, according to a senior official familiar with the plans, who spoke on condition of anonymity to discuss a sensitive topic. But there was no indication whether lawmakers in his party, many of whom have turned against him, would agree to that. Downing Street said it planned to issue a statement to the country later on Thursday.

Mr Johnson’s decision, first reported by the BBC on Thursday, capped a dizzying 48 hours in British politics which began on Tuesday night with the unexpected resignation of two of his most senior ministers, the Chancellor of the Exchequer, Rishi Sunak, and health secretary, Sajid Javid. This was followed by a flurry of resignation announcements from other lawmakers and officials all day Wednesday and Thursday morning.

The resignation brings an abrupt end to a stormy tenure that featured a landslide election victory three years ago and a successful campaign to pull Britain out of the European Union, but which has crumbled under the weight of a series of incessant scandals.

The timing of Mr Johnson’s departure was unclear and will likely depend on the timeline for selecting a new leader. It’s in the hands of the 1922 Committee, the powerful body that represents backbench Conservative Party lawmakers.

They will likely take advantage of the summer break to complete the process of selecting the new leader of the Conservative Party who will become prime minister. At the latest, they will want to have installed the person at the time of the annual party conference in the fall.

Keir Starmer, leader of the opposition Labor Party, Responding to the news, said it was ‘good news for the country that Boris Johnson has quit’ but added: ‘It should have happened a long time ago’.

“He has always been unfit to perform his duties. He has been responsible for industry-wide lies, scandals and fraud,” Mr Starmer wrote in a letter posted on his Twitter account. “And everyone who was complicit should be ashamed.”

Mr Johnson’s latest troubles erupted last week after a Tory lawmaker, Chris Pincher, got drunk at an exclusive London club, where he was said to have groped two men. Mr Johnson had appointed Mr Pincher to a party leadership position in February despite previous complaints of inappropriate behavior against Mr Pincher.

Mr Johnson initially denied knowing about the previous complaints, but it later emerged he had known about them and he eventually admitted it was a mistake to appoint Mr Pincher to the high post.

As members of Mr Johnson’s party left government, one after another voiced their opposition to Mr Johnson’s leadership, denounced him for his lack of integrity in office and called on him to step down, underscoring his precarious position.

Adding their names to this growing list before 9 a.m. Thursday were Brandon Lewis, the Secretary of State for Northern Ireland; Helen WhatelySecretary of the Exchequer to the Treasury; Damien Hinds, the Minister of Security; and George Freemanthe Minister of Science.

Michelle Donelan, who had just assumed the role of education secretary hours earlier when her predecessor, Nadhim Zahawi, was promoted to a newly vacant cabinet post, also resigned.

Mr Zahawi, whom Mr Johnson appointed Chancellor of the Exchequer to replace Mr Sunak, then stepped up the pressure on the Prime Minister, in a letter calling on him to resign.

“Prime Minister, you know in your heart what is the right thing to do, and leave now,” he wrote in the letter posted on his Twitter account.