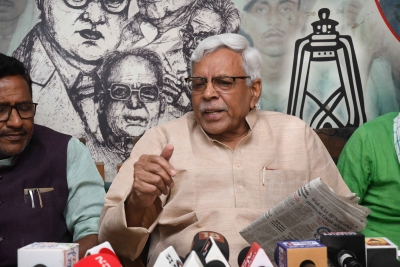 Patna: Following the CBI’s raids on 17 locations of party leader Lalu Prasad Yadav and his family on Friday, RJD Vice President Shivanand Tiwari claimed the BJP had become restless after the proximity of Chief Minister Nitish Kumar and the party leader Tejashwi Yadav.

“The BJP cannot digest the closeness of Nitish Kumar and Tejashwi Yadav. They have come together over the issue of caste based census and BJP and RSS want to stop it at all costs in Bihar. The idea of ​​the BJP and the RSS is to deprive a large part of the population of resources and facilities,” he claimed.

“The caste-based census will give the actual numbers of each caste in Bihar. Accordingly, the state government would prepare policies and provide them with facilities. After the caste-based census, demand for distribution of resources and facilities would be possible and the public would be more vocal about it. The BJP wants to prevent the country from getting into a situation like this where people would oppose the government for their rights,” he added.

Ashok Chaudhary, who is believed to be Nitish Kumar’s ‘kitchen cabinet’ minister, denied the RJD claim.

“When Lalu Prasad Yadav was railway minister, allegations of corruption were made against him regarding the recruitment process in the railways,” Chaudhary said.