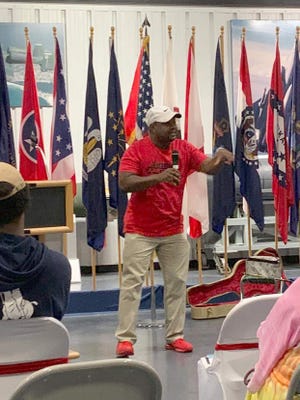 EGLIN AFB – The timing couldn’t have been better.

Allison morris, a founding member of the African-American Military Heritage Society, is delighted that the first Event for Juneteenth took place just after US President Joe Biden enacted the law on June 17 declaring it a federal holiday.

Juneteenth observes the end of slavery in the United States, marking the day in 1865 when news of emancipation reached Galveston, Texas.

“Obviously we didn’t know this was going to happen,” Morris said. “It was very surreal. It was impeccable timing. I felt like we were making history because it was the first Juneteenth they had at the weapon museum.

Despite the bad weather caused by Tropical Storm Claudette, more than 400 people entered and left the museum. The African-American Military Heritage Society plans to make the Juneteenth celebration an annual event, Morris said.

The event began with an opening prayer from Terrance Bulger, pastor of the Greater Peace Missionary Baptist Church in Fort Walton Beach, and welcoming remarks from De’Carlo Garcia, the master of ceremonies. Next, saxophonist Devon Smith performed the black national anthem “Lift Every Voice and Sing”.

“It was a great rendition, his rendition of the song,” Morris said.

Morris also loved the rare solo performance by Cheryl Jones, which usually occurs with Jones and Company, and the original music by Crystal Smith.

“It was a treat,” Morris said.

Morris also noted that they had red velvet Bundt cakes and strawberry soda to symbolize the blood spilled by slaves during the Civil War.

The event also featured presentations showcasing local black-owned businesses, Morris said. The owners were interviewed during a 40-minute presentation that looped through the theater area at the entrance to the museum, she said.

The organizers and speakers also informed the participants about the meaning of Juneteenth.

“We read the information on what Juneteenth is, what Juneteenth means to Americans in general,” Morris said. “We can celebrate both July 4th and this day. They are both significant in the history of the United States.

You can like:Stand up: meet the locals leading the fight against racism and police brutality

Many attendees told Morris that they felt like they were part of the community again, she said.

“We have a lot of people from other areas where they were from, they celebrated June 15, but then they came here and it didn’t happen,” Morris said. “They were very happy to see it happening here. They said it was beautifully done.

Some of the local guest speakers were also honored to be a part of the event, she said. Among them were Tená V. Baker, activist and author; Elesia Marie, actress and director; Gregory Seaton, education and civil rights activist; Charles Thomas, representative of the Phi Beta Sigma fraternity; Karen Lodie Hennessy, Outreach Coordinator for the Emerald Coast Sickle Cell Association; Chuck Sanders, owner of Harbor Snacks, the only black-owned business in HarborWalk Village; and Marlayna Goosby, founder of Grow Your Gift Conservatory of Music.

“They talked about what Juneteenth meant to them,” Morris said. “Thanks to this initial act, we can now vote. Things kept happening. There is still work to be done, but they shared their experiences, what it meant to them – to have rights, to be able to vote. We have to know where we came from to know where we are going.

A story of well-being:Mother and daughter with sickle cell disease in Fort Walton Beach enjoy 2020 blessings

Morris said she believed the event would be even more successful in the future with the collaboration of local officials. Cinco Bayou City Councilor and Acting Mayor Danny Dillard and Crestview Mayor JB Whitten were in attendance on Saturday. It was Whitten’s birthday, she said.

“We definitely got their attention,” Morris said. “We can’t wait to put on another one. I am very grateful to everyone who came, even during a tropical storm.