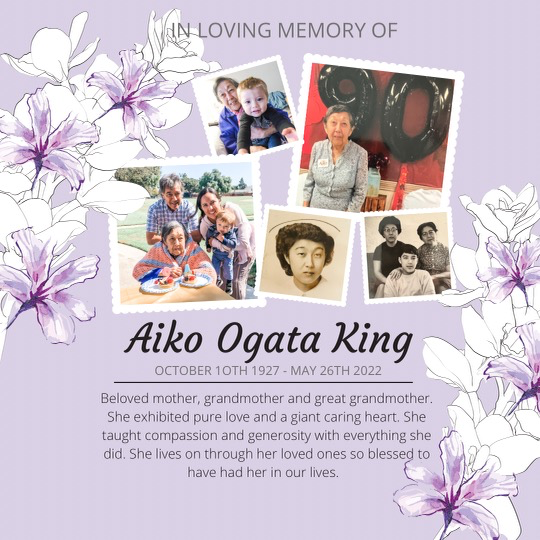 Aiko Ogata King: a model of energy, compassion and positivity

We mourn the loss of Stamp Our Story co-founder Aiko Ogata King. She died last week, Thursday May 26, at the age of 94, with her family close by.

Aiko was born on October 10, 1927 in Turlock, California. She grew up in the Japanese farming community of Central Valley where she would meet Fusa Takahashi and become lifelong friends. As young teenagers, the two would later be expelled from their hometown along with their families and both forced into Amache, Colorado, incarceration camp during World War II. After the war, she served as a US Army civilian nurse during the Korean War in Japan.

Aiko developed an interest in collecting postage stamps, as well as a knack for being a go-getter and avid community activist in her Ventura Japanese American Citizens League chapter. She and her childhood friend Fusa saw an exhibit of World War II Nisei soldiers together at the Japanese American National Museum in Los Angeles in 2005 and were inspired to do more to commemorate the Nisei who served.

The two friends thought about having a U.S. commemorative stamp made to honor Nisei soldiers and embarked on a 15-year journey that culminated in the U.S. Postal Service issuing the Forever “Go For Broke” postage stamp. Japanese American Soldiers of World War II”. June 2021.

Together with family and friends, they developed the Stamp Our Story committee, which would become a national and international movement after the U.S. Postal Service repeatedly denied their requests. Thanks to their commitment and persuasiveness, the postal service finally changed and issued its stamp.

Aiko’s energy, compassion and positivity throughout her life will forever be remembered by those she knew, and we now mourn her loss alongside her family. Aiko’s kind and generous heart led her into a life of service, from nursing to her work with JACL and our campaign. Whenever you pick up or see the Go For Broke Soldiers Forever stamp, think of Aiko. His interest in stamps and his hard work made it a reality.

Osako is co-chair of the Stamp Our Story committee.

Which are you going to listen to?