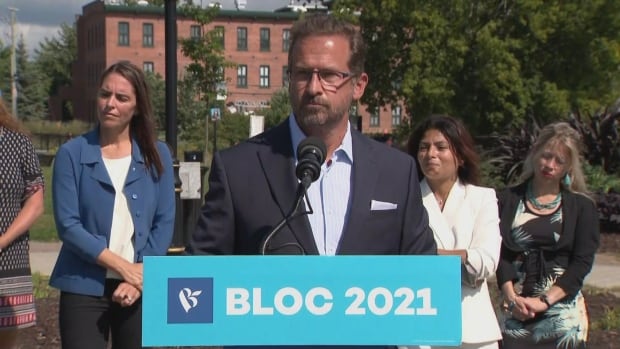 After praising Quebec’s egalitarianism, the leader of the Bloc suspends questions to the candidate

Bloc QuÃ©bÃ©cois leader Yves-FranÃ§ois Blanchet returned to a page of a book that served his party’s electoral fortunes well in 2019, praising equality between men and women in Quebec and pledging allegiance to the bill 21, the controversial provincial law that prohibits public servants from wearing religious symbols at work.

But in the same breath, Blanchet found himself preventing one of his party’s candidates from speaking to the media.

“I don’t think we’re going to go this morning, madam, sorry,” he said after a reporter asked Ensaf Haidar a question, who is running for the Bloc in the riding of Sherbrooke, in eastern Quebec.

Haidar is the wife of Raif Badawi, blogger and prisoner of conscience in Saudi Arabia. In 2018, Haidar expressed his support for the far-right People’s Party of Canada and its leader, Maxime Bernier.

“Ms. Haidar has undergone an evolution in her way of thinking which brought her to the Bloc QuÃ©bÃ©cois as a candidate,” said Blanchet.

Asked a third time by reporters why Haidar couldn’t be allowed to speak for herself, Blanch replied, “I think ‘authorize’ is a big word,” before suggesting that she would normally be on her own and available for help. talk when he wasn’t. . Then his team ended the press conference.

Two years ago, Blanchet brought his sovereignty movement back from the brink, more than tripling the number of Bloc seats in the House of Commons and helping to prevent Justin Trudeau and the Liberals from returning to a majority.

In part, he accomplished this by contrasting the Bloc defending Quebec’s secular values â€‹â€‹legislation with Trudeau’s suggestion that he could intervene in court to protect minority rights.

But that debate has largely fallen by the wayside this year. Trudeau said in April that he recognized there is a new decision of the court of Quebec which mainly maintains the bill, and offered to suggest it would be up to Quebecers to challenge the law themselves in court.

Other political parties have said they will not challenge the bill in court either, with the Conservatives going so far as to put that in writing in their platform this year.

Blanchet’s party calls on all other federal leaders to commit not to allow taxpayers’ money to finance legal challenges against any Quebec law, including Bill 21.

“We have not seen anything done since 2019 to allow us to relax on this issue,” said Blanchet.

Asked Tuesday if the secularism file is resolved, Trudeau said it is always important for a society to ask questions, and added that he is following the file closely as Quebecers “defend their rights in front of the courts”.

â€œMr. Blanchet is always looking for a fight,â€ Trudeau said.

Conservative Leader Erin O’Toole reiterated her party’s commitment not to challenge Bill 21, but championed the idea that public funds fund court challenges. “This program is independent. And I would like to respect it,” he said.

Blanchet pointed the finger at Jagmeet Singh, asserting that the leader of the NDP called â€œQuebeckers of all kinds of racistsâ€.

Singh said in response that he was against the denigration of Quebec, and said systemic discrimination is “something that affects people across the country.”

The lack of vigorous opposition to the Quebec law from parties in the federal election campaign has dismayed many observers and minority rights activists.

â€œBasically what all the federal leaders have done is they have decided to sacrifice human rights on the altar of political expediency, given the number of seats there are in Quebec Said Fareed Khan, founder of Canadians United Against Hate.

Khan said he believed the law was about bigotry, especially against Muslims in Quebec.

“For Mr. Blanchet to claim that it is about consecrating secularism, well, secularism already exists in Quebec,” he said. “If this were left to people in certain provinces, members of the LGBTQ community would not have rights.”

The values â€‹â€‹of the Bloc “are also mine”, declares the candidate

As for Haidar, the party offered journalists a melee with her once Blanchet’s morning media availability ended.

“The values â€‹â€‹of the Bloc QuÃ©bÃ©cois are also mine,” said Haidar, citing Bill 21 as an example.

She also said she expressed her enthusiasm for Maxime Bernier three years ago because he supported her husband.

â€œMaxime Bernier is a person and he just called me to say ‘I am with you’,â€ she said. â€œBut in politics, it’s different.

Raif Badawi has been jailed in Saudi Arabia since 2012 for expressing liberal views on Islam.

In January, the House of Commons unanimously approved a Bloc QuÃ©bÃ©cois motion to grant Canadian citizenship to her imprisoned husband.