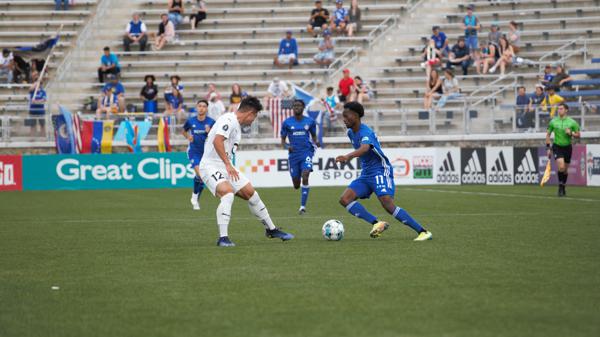 CHARLOTTE, North Carolina – Charlotte Independence (3-1-2, 3rd) were able to maintain their one-goal advantage despite a man falling in the 65th minute, beating FC Tucson (1-4-1, 11th) 2-1 Sunday evening. Now tied on points for first place in the standings, the Jacks continue their strong start to the Ligue 1 season, while FC Tucson drop their third game in a row ⁠ – tied for their second longest streak since their first season in the League 1 in 2019.

Independence opened the scoring early, as reigning Player of the Month Tresor Mbuyu sent a deflected ball from a tight angle past Carlos Merancio in the Tucson goal in the 18th minute. FC Tucson responded in the second half of the first 45 minutes, as Tyler Moss scored his first professional goal to level the score. Just before the half-time break, however, Independence struck again when Koa Santos fired a low shot from outside the penalty area to stun Merancio and FC Tucson. The only second-half action saw Santos sent off after receiving his second yellow card in the 65th minute.

USLLeagueOne.com Player of the Match

Tresor Mbuyu (CLT) – Mbuyu found the back of the net for the first time since April 17 when Charlotte won on Sunday night. The Congolese striker also added to Charlotte’s win with six digs, three shots and a chance created.